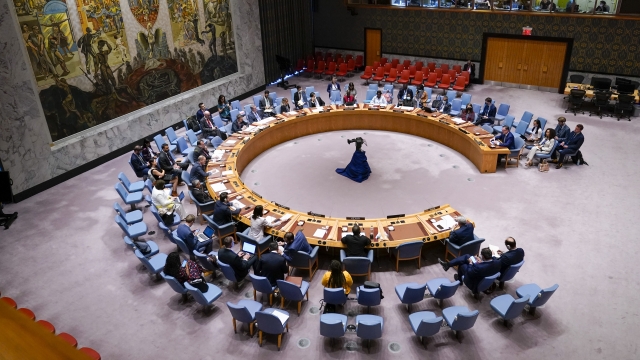 China and Russia defended their vetoes of a strongly backed U.S. resolution that would have imposed tough new sanctions on North Korea, speaking at a first of its kind General Assembly meeting Wednesday.

The debate was held under new rules requiring the General Assembly to examine any veto wielded in the Security Council by one of its five permanent members.

Close allies China and Russia reiterated their opposition to more sanctions, blaming the United States for rising tensions on the Korean peninsula and insisting that what’s needed now is dialogue between North Korea and the Biden administration.

The missile launches were in response to North Korean launches on Sunday, marking the country's 18th round of missile tests this year.

Nearly 70 countries signed up to speak at the open meeting which General Assembly President Abdalla Shahid hailed as making the U.N. more efficient and accountable. “It is with good reason that it has been coined as `revolutionary’ by several world leaders I have recently met,” he said.

Denmark’s U.N. Ambassador Martin Bille Hermann told the 193-member world body as he started his address on behalf of the Nordic countries: “History is being made today.”

The Security Council is entrusted with ensuring international peace and security, he said, and the use of a veto to prevent the council from discharging its duties “is a matter of great concern.”

A united Security Council imposed sanctions after North Korea’s first nuclear test explosion in 2006 and tightened them over the years in a total of 10 resolutions seeking — so far unsuccessfully — to rein in its nuclear and ballistic missile programs and cut off funding.

The 13-2 Security Council vote on May 26 marked a first serious division among its five veto-wielding permanent members — China, Russia, United States, Britain and France — on a North Korea sanctions resolution.

On Sunday, North Korea fired eight short-range missiles in what appeared to be a single-day record for the country’s ballistic launches. It was the reclusive north Asian country’s 18th round of missile tests in 2022 that included its first launches of intercontinental ballistic missiles in nearly five years.

China’s U.N. Ambassador Zhang Jun addressed diplomats first, accusing the United States of ignoring positive steps taken by the Democratic People's Republic of Korea and returning to its “old path" of “chanting empty slogans for dialogue and increasing sanctions against the DPRK.”

This has intensified “the DPRK distrust of the U.S.” and brought talks “to a complete deadlock,” he said.

“Where the situation goes from here will depend to a large extent on the actions of the U.S.," he said, “and the key lies in whether the U.S. can face up to the crux of the problem, demonstrate a reasonable attitude, and take meaningful concrete actions.”

Russia’s deputy U.N. ambassador Anna Evstigneeva said new sanctions against the DPRK “would be a dead end,” stressing that current U.N. sanctions have failed to guarantee security in the region “nor moved us any further toward settling the nuclear missile non-proliferation issues.”