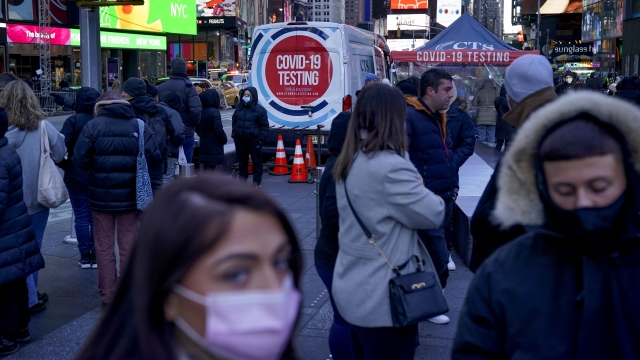 One year into the Biden administration and COVID numbers are reaching record highs as the president's approval rating slips.

President Joe Biden stepped into the Oval Office with a 200-page plan to defeat COVID-19 — a seven-point blueprint focused on restoring trust and safely reopening the country. It was a road map that was put to the test as an ever-evolving virus grips the United States.

On his first full day in office, the president spoke about hospitals at capacity, with short staff and low morale.

One year later and the scene hasn't changed much.

He began by reeling off early progress in fighting COVID and showcasing the passage of an ambitious bipartisan roads-and-bridges infrastructure deal.

According to the Centers for Disease Control and Prevention, the weekly average number of Americans hospitalized with COVID-19 is over 140,000 — an all-time high not seen since the Biden administration took over.

The key difference in the start of 2021 compared to 2022 is the tools at our disposal.

President Biden devoted his early days in the White House to expanding access to vaccines, making a pledge in March to make shots widely available by May 1 and small gatherings returning by July 4.

He made a goal to provide 100 million shots in his first 100 days in office — a target the administration was able to double by late April. It showed signs of optimism heading into the summer.

"The bottom line is the virus is on the run and America is coming back," President Biden said. "We're coming back together."

The CDC decided to strip its mask mandate for fully vaccinated individuals in most settings and situations. The guidance change was met with some smiling faces — and confusion.

Hospitalizations began dipping to a pandemic low in early June, with signs of normalcy returning.

This was joined by a pitch to sweeten the deal for Americans to roll up their sleeves. There was free pizza, free beer, lottery prizes and other incentives totaling millions of dollars.

There were also signs of accomplishment on another major goal of getting kids back in classrooms.

At 78, he's the oldest person to assume the presidency.

However, this taste of normalcy was quickly complicated by the emergence of the Delta variant of the virus.

"We're in a tough stretch and it could last for a while," President Biden said. "This is a pandemic of the unvaccinated."

Vaccination levels began to tick back up as more Americans became eligible for the shot, including kids as young as 12. Near the holiday season, children as young as 5 were also cleared for the vaccine.

Then the more transmissible Omicron variant came on the scene, dooming one of the Biden administration's early goals of reaching a semblance of "normalcy" by Christmas.

Lines wrapped around street corners for COVID tests and businesses were forced to shutter due to sick employees. It was a COVID conundrum carrying into the new year with the White House boosting its efforts with booster shots. The administration also created a website allowing Americans to order free at-home test kits.

"Testing, we should have done it quicker," President Biden said. "But we're doing remarkably well now."

According to a CBS News-YouGov poll, just under half of Americans approve the president's job in handling the pandemic, compared to 67% approval last March.

The numbers are grim for an administration at risk of losing Democratic control of Congress as we near the midterm elections this November.