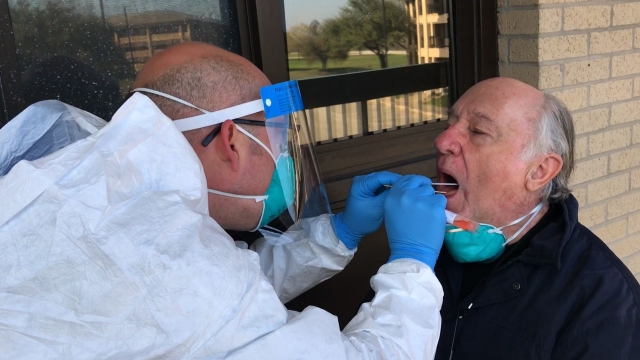 Health officials are warning Americans to prepare for a potential coronavirus outbreak on U.S. soil

"Truth is, we think that the wave is coming. The question is, how big is the wave going to be?" Dr. David Marcozzi, an associate professor of emergency medicine at the University of Maryland School of Medicine told Newsy.

Dozens of Americans are already in quarantine. Most of them were on board the Diamond Princess, where the coronavirus spread. Gay and Phil Courter are quarantined in Texas. They spoke to Newsy via Skype.

They were quarantined for almost two weeks in Yokohama, Japan, before they were evacuated on a cargo plane to the U.S.

"People running around in different color hazmat suits to wake up on the plane for your temperature check. And the man leaning over to check your temperature is literally wearing a 'Ghostbusters' outfit, with, you know, the hoses coming out and all of this, and pack on the back. It's otherworldly," Gay Courter said.

But the nightmare continued when they landed at Lackland Air Force Base.

"I mean, you think you woke up in the middle of a B-movie that's 'Contagion' or 'Hot Zone' or whatever. You're right in it, and the scene with our big cargo plane landed at Lackland Air Force Base, it was very, very foggy. And it was early morning. ... And all you see is men in white hazmat suits rushing around. And it looks like you're the spaceship that has landed," Courter said.

The Courters say endless days of isolation is weighing on them. They are not allowed to open the door without a mask, food is delivered in brown bags by personnel in hazmat suits, and they are highly encouraged to avoid leaving their rooms.

"Truthfully, the first few days here, we got very depressed. ... We'd already been through 14 days of quarantine. Fourteen more seemed interminable. Plus, they can add whatever they want to it, they can do whatever. And if we test positive, it's never-ending," Gay Courter said.

"Quarantine is not easy. And you have to kind of be isolated from your family members, from friends, from your business. And I think as a nation, as a state, as businesses across the nation think about how they're going to handle how we're going to respond to this event, we need to be able to support the ability to self-quarantine for folks who may be concerned that they may be ending, they may have been in contact with the virus," Marcozzi said.

To pass the time, Gay Courter is writing a book about their experience.

Their two-week quarantine in base housing is set to end on March 3. But she says there is still a possibility they can test positive for the virus.

"But the worst part about that, besides the chance of dying, is that we'll be separated. And never in 50 years of marriage [have we] had to go through any trials or tribulations without each other's support. So that's scary," Courter told Newsy.