U.S. Continues Flying In Baby Formula From Overseas Amid Shortage 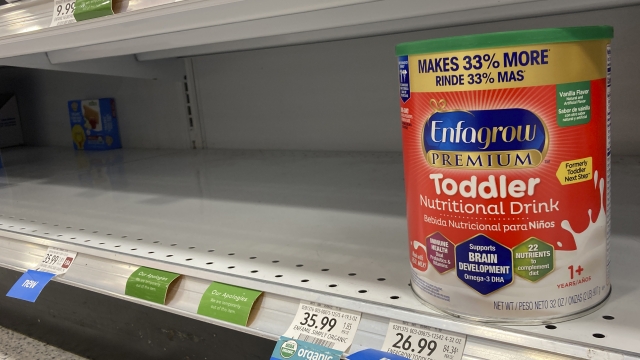 SMS
U.S. Continues Flying In Baby Formula From Overseas Amid Shortage
By Maura Sirianni
By Maura Sirianni
June 18, 2022
When it comes to the baby formula crisis, the Biden administration has received major backlash for months from both Democrats and Republicans.

With July less than two weeks away, many parents of formula-fed infants are still left wondering how they’ll feed their babies. A problem they’ve been stressed about for months.

"It's infuriating, it's absolutely heartbreaking to feel like you don't know when the next time you're going to be able to find this formula,” said Lindsey Hartell, a mom in Indianapolis.

Like many babies, Hartell’s 10-month-old son Owen needs specialty formula, which she says is still difficult to find.

"I can't find his formula. It is so scary,” said Hartell.

A quick search for baby formula on Walgreens and CVS pharmacy apps, shows inventory of select Enfamil, Similac and Gerber U.S. brand baby formula is still low or out of stock.

In a statement to Newsy, officials with CVS said “We are working with suppliers to create equitable access to formula. Our 3-product limit remains in place.”

Target is also still limiting in-person and online customer purchases through June, despite receiving millions of bottles of formula from U.K. manufacturer Kendal Nutricare, whose Kendamil product is a good substitute for babies needing Similac. Target said it’s working to distribute the U.K. product to stores across the U.S. “as quickly as possible.”

Bad weather impacted manufacturer Abbott Nutrition, whose Sturgis, Michigan, plant shutdown back in February contributed to nationwide formula shortages. The plant had to pause production again this week. This time, to survey damage caused by strong storms and flooding. The company is temporarily halting production of its EleCare specialty formula, and said as a result of the damage, production and distribution of new product will likely be delayed ‘a few weeks.’

"We can't control their timeline. What we can do is continue to focus on what we're going to do which is ramping up production, increasing supply and making sure that American families only have access to safe formula that is the focus for us,” said White House Press Secretary Karine Jean-Pierre.

To ease the strain, the White House completed its seventh Operation Fly Formula mission, including a shipment of nearly 550,000 8-ounce bottles of Nestlé specialty infant formula from Switzerland to Louisville, Kentucky, this week. Along with shipments into the D.C. area, and Columbus, Ohio.

"I kept hearing oh there's a military plane that came in and dropped off a whole bunch of formula and I'm like where's my formula and it's not there. It's scary,” said Hartell.

Despite the setback, Abbott says it’s nearly back at the production level of formula it saw in January, despite the Sturgis plant being out of commission.

FDA commissioner, Dr. Robert Califf, calling the more recent shutdown "an unfortunate setback." Adding that measures already taken mean the U.S. should have enough product to meet demand and that the FDA and Abbott both want to get the facility up and running again in a quick and safe manner.

When it comes to the baby formula crisis, the Biden administration has received major backlash for months from both Democrats and Republicans.

President Joe Biden said recently, with the millions of bottles coming in from overseas, “We have work to do... but critical progress is being made.”

By this week’s end, Operation Fly Formula will have delivered the equivalent of 13 million 8-ounce bottles since it began.