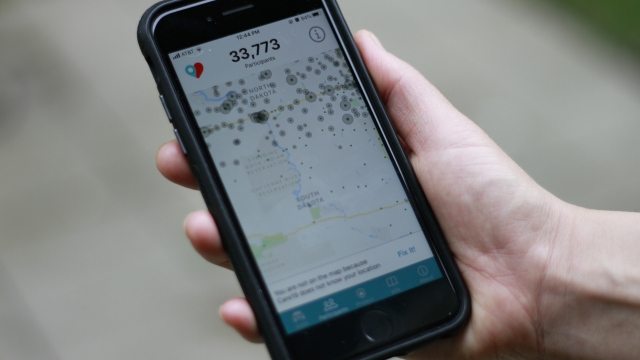 When the first wave of COVID-19 hit the U.S., tech giants like Apple and Google announced contact tracing plans that were said to be game-changers for combating the spread of the virus.

“The other, more serious problem with location data is that it contains personally identifiable information that can be impossible to algorithmically remove. If I can guess where someone works and lives, I can easily figure out who that person is, usually by pulling additional data from commercially available data sources like Equifax.”

Concerns about data tracing were largely raised by people living in North Dakota and Utah. As of late June, only 4% of North Dakotans use the state’s GPS location tracing app.

North Dakota is now working on a second, more secure app built around the Apple-Google exposure notification framework. Newsy’s Zach Toombs recently explained how this works in an episode of our Virology series:

“Two strangers share the same park bench and have a brief conversation. Each of their phones have a contact tracing app that uses Bluetooth to record that the two devices have been near each other through unique identifying beacons.”

“The Apple-Google approach, if done correctly, would actually minimize the leaking of information because there’s extra cryptographic techniques put on top to maintain privacy.”

But he also noted that even with the privacy protections, this approach still has a similar drawback as other state-government tracing apps:

“It requires people to actively opt-in. And you’re likely only going to get a small fraction of the population who will actively go and decide that they actually want to do this.”

This is the case for most states. As of mid-July, only North Dakota, South Carolina, Alabama and Virginia had confirmed they would use the companies’ exposure notification framework as part of their tracing efforts.

As with most of the COVID-19 response efforts, experts say contact tracing is a patchwork, state-based approach that could be solved with a national app.

Ramesh Raskar of MIT says that even if we can’t get automated app tracing to be effective, more personnel are needed immediately.

The U.S. is well behind other countries on hiring manual contact tracers; it only has about 37,000. A Johns Hopkins report found we need at least 100,000 more to adequately track the illness.