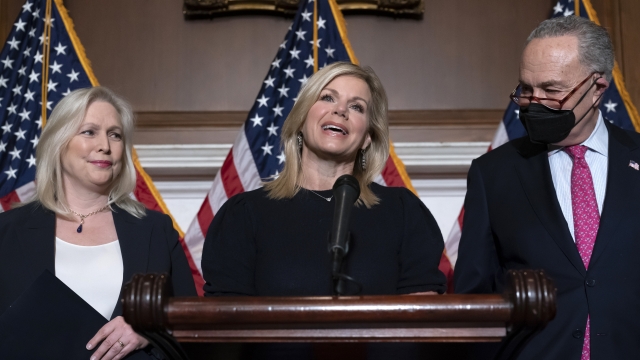 Congress on Thursday gave final approval to legislation guaranteeing that people who experience sexual harassment at work can seek recourse in the courts, a milestone for the #MeToo movement that prompted a national reckoning on the way sexual misconduct claims are handled.

The measure, which is expected to be signed by President Joe Biden, bars employment contracts from forcing people to settle sexual assault or harassment cases through arbitration rather than in court, a process that often benefits employers and keeps misconduct allegations from becoming public.

Significantly, the bill is retroactive, nullifying that language in contracts nationwide and opening the door for people who had been bound by it to take legal action.

Democratic Sen. Kirsten Gillibrand, who has spearheaded the effort, called it "one of the most significant workplace reforms in American history."

Gillibrand, said the arbitration process is secretive and biased and denies people a basic constitutional right: a day in court.

"No longer will survivors of sexual assault or harassment in the workplace come forward and be told that they are legally forbidden to sue their employer because somewhere in buried their employment contracts was this forced arbitration clause," she said.

Gillibrand, who has focused on combating sexual harassment and sexual misconduct in the military, originally introduced the legislation in 2017 with Republican Sen. Lindsey Graham.

The legislation had uncommonly broad, bipartisan support in a divided Congress. That allowed the bill to be passed in the Senate by unanimous consent — a procedure almost never used for significant legislation, especially one affecting tens of millions of Americans. The House passed the bill this week on a robust bipartisan basis in a 335- 97 vote.

Former Fox News anchor Gretchen Carlson, who accused the now-deceased network CEO Roger Ailes of making unwanted advances and harming her career when she rejected him, testified in support of the legislation. Some employee contracts at the network included binding arbitration clauses.

Carlson, who appeared with Gillibrand and other senators at a news conference after Senate passage of the bill, said she could never have imagined, after coming forward with her allegations five years ago, that it would lead to a change in the law that both Democrats and Republicans would get behind.

"Marching in the streets can inspire us. Editorials can open our minds. Hashtags can galvanize, but legislation is the only thing that lasts," Carlson said.

An estimated 60 million American workers have clauses tucked into their employment contracts forcing them to settle any allegations of sexual misconduct in private arbitration proceedings, rather than in court. The widespread practice has come under fire in the wake of the #MeToo movement for forcing employees to seek recourse without a jury, a chance to appeal a decision or the sunlight of a public court process.

"If you could ever say any legislation was long overdue, this is it," said Senate Majority Leader Chuck Schumer. He called it "almost medieval" to force victims of harassment and assault "to shut up, not tell anyone about it and not seek justice."

The clauses barring lawsuits are not just limited to employment contracts but have been found in other service agreements, preventing those who were sexually assaulted at nursing homes or massage parlors from taking their claims to court.

Defenders of the arbitration process, including business groups, have contended it is a faster and less costly way to resolve disputes than through lengthy courtroom proceedings.

Graham said on the Senate floor that it does not harm businesses to ensure people who are harassed at work are treated fairly.

"This is not bad for business. This is good for America," he said.

Many workers don't realize they're bound by forced arbitration rules and how the process can disproportionately benefit employers, with companies typically paying out smaller sums to settle claims, Gillibrand said.

In a sign of the power of the #MeToo movement and wide-ranging support behind the change, the legislation's co-sponsors included senators who are ideologically polar opposites, such as New Jersey Democrat Cory Booker and Missouri Republican Josh Hawley.

Graham said at the news conference that things can be "pretty screwed up" in Washington but the legislation signals "that there's some hope, as long as we listen to each other and try to make life better where we can find common ground."

The White House released a statement earlier this month in support of the bill.