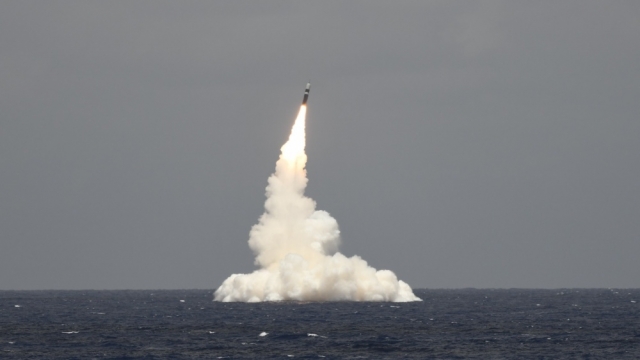 SMS
U.S. Confirms Submarine Tested Missile Capable Of 'Low-Yield' Nuke
By Peter Hecht
By Peter Hecht
February 6, 2020
The launch of a ballistic missile from a submarine is part of a Trump administration initiative to expand nuclear readiness.
SHOW TRANSCRIPT

On Tuesday, the Navy confirmed the launch of an unarmed Trident II ballistic missile. It is part of a Trump administration initiative to expand U.S. nuclear readiness so that strategic nuclear weapons — with reduced destructive power — can be deployed from sea.

The Associated Press broke the story before the Navy's formal announcement. The AP said the specific power of the missile is classified. But it said experts believe it can be equipped to carry a nuclear warhead having about one-third the power of the atomic bomb dropped on Hiroshima in World War II.

The Defense Department says it intends to modify only a small number of missiles to carry such a warhead.

Undersecretary of Defense for Policy John Rood says the effort is intended as a deterrence for "potential adversaries, like Russia," to reduce the likelihood of a nuclear confrontation. He says the test demonstrates there is no advantage in using low-yield nuclear weapons in battlefield situations "because the United States can credibly and decisively respond."

Russia's deputy foreign minister called the missile launch "alarming." Sergei Ryabkov said the move "lowers the nuclear threshold" and suggests that the U.S. "considers it possible to wage a limited nuclear war and win such a war."