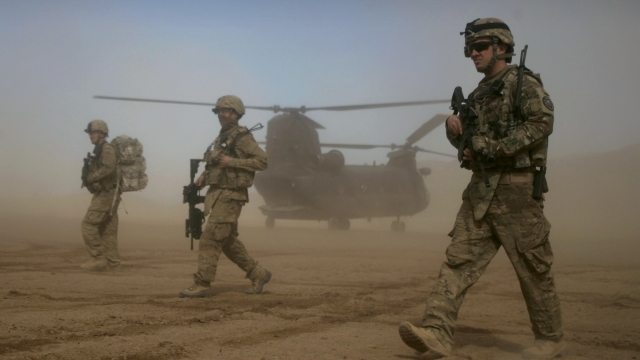 A spokesman for U.S. Forces Afghanistan described it as "a defensive strike" to counter a Taliban attack on an Afghan checkpoint.

The U.S. military conducted an airstrike against the Taliban in Afghanistan on Wednesday.

A spokesman for U.S. Forces Afghanistan described it as "a defensive strike" to counter a Taliban attack on an Afghan National Security Forces checkpoint.

He added that "the Taliban conducted 43 attacks" on Afghan troops in the southern province of Helmand Tuesday.

Wednesday's strike came less than a day after President Donald Trump said he'd spoken directly with a leader of the militant group.

"I spoke to the leader of the Taliban today. We had a good conversation," President Trump said. "We've agreed there's no violence, we don't want violence. We'll see what happens."

Negotiators for the U.S. and the Taliban signed an agreement over the weekend that's aimed at ending the 18-year war in Afghanistan. Under the deal, the U.S. has agreed to withdraw all of its troops from the region within 14 months if the Taliban meets certain commitments.

The military spokesman criticized the Taliban Wednesday for "appearing intent on squandering this [opportunity.]" He said the U.S. was still "committed to peace" in Afghanistan, but that it had a responsibility to defend its Afghan allies.