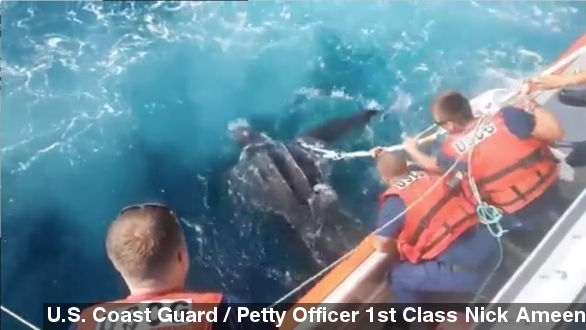 We often hear about the U.S. Coast Guard being dispatched to rescue stranded boaters, but Saturday crew members were sent out into the water for a very different reason.

The Coast Guard recently released this video of three of its members helping to untangle an 800-pound turtle from a fishing line off the coast of New Jersey. As you can see, they were eventually successful, and the turtle swam off into the ocean.

The U.S. Coast Guard was notified after someone spotted the turtle earlier that morning.

After receiving GPS coordinates of the turtle's exact location, the Coast Guard teamed up with employees of the Marine Mammal Stranding Center, a nonprofit organization that helps rescue sea turtles and marine mammals in trouble along the New Jersey coast.

One of the petty officers involved in the rescue explained what he and the other members of the crew found when they arrived at the turtle's location.

"The turtle was all tangled up. He had a blind from a buoy holding the fishing troll wrapped around one of his flippers."

It's believed the tangled-up turtle was a leatherback turtle like the one shown in this picture.

The Coast Guard said it was about 5.5 feet long and weighed about 800 pounds.

There's a good chance that turtle is still growing though, since National Geographic says leatherback turtles can grow to be "seven feet ... long and exceeding 2,000 pounds."

And they've tangled with fishing buoys before. The U.S. Navy rescued three turtles in January.

According to National Geographic, leatherback turtles like the one rescued Saturday can be found in all major bodies of water except the Arctic and Antarctic oceans.