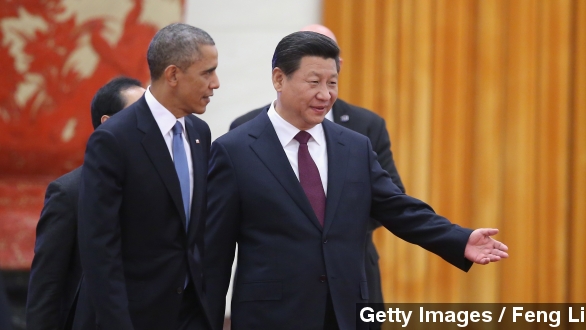 SMS
U.S., China Come To Terms On Historic Climate Change Deal
By Jay Strubberg
By Jay Strubberg
November 12, 2014
President Obama and President Xi Jinping finished up the deal Wednesday near the end of the trade summit in Beijing.
SHOW TRANSCRIPT

The United States and China have struck a historic agreement to cut greenhouse gasses over the next two decades.

President Obama and President Xi Jinping ironed out the new deal Wednesday at the tail end of the trade summit in Beijing.

As part of the agreement, the U.S. says by 2025, it will trim a little over a quarter of the carbon emissions levels from 2005. China will peak its carbon emissions by 2030 and plans to employ several green energy initiatives as well.

Even amid some criticisms the deal is mostly symbolic, it still marks the first time China has ever committed to reducing greenhouse gas emissions. The Obama Administration hopes other countries will follow suit.

Plus, climate experts told The New York Times the deal is crucial to get the ball rolling with carbon-cutting measures on a global scale, especially since the U.S. and China are the two top carbon polluters in the world.

Still, on the U.S. side of things, the deal could face some obstacles with the new Republican-controlled Congress.

Although CNN talked to a White House officials who noted, "'leading climate deniers' in the GOP might try to stop the initiative, [but] hinted the President may act alone if necessary."

PRESIDENT BARACK OBAMA VIA THE GUARDIAN: "The United States welcomes the rise of a prosperous, peaceful and stable China."

Greenhouse gasses weren't the only issue addressed at the summit.

Tuesday, the world's two largest economies came to terms on a breakthrough trade agreement that is expected to lower tariffs on a number of high-tech goods throughout the world.

The U.S.-China pact comes after European Union leaders agreed to similar commitments to reduce carbon emissions last month. All countries involved are reportedly expected to lay out the specifics of their plans by March.