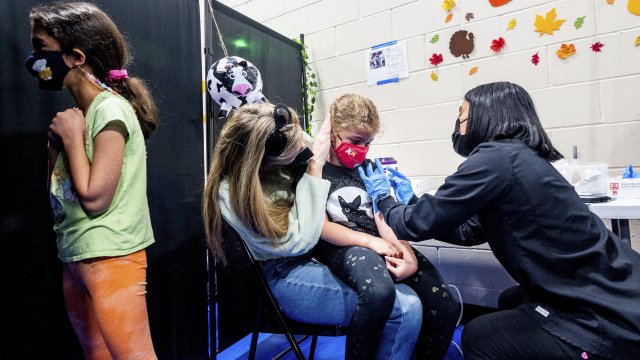 Children ages 5 to 11 can now get a COVID shot.

Among the first: 7-year-old Kye'vontay Jordan.

"All I felt was a little pinch,” said Kye'vontay.

"Now I can sleep not worrying about him going to school and, you know, being exposed to the coronavirus could really affect him and mess him up," said Kye'vontay's father, Brian Jordan.

Fifteen million doses of kids' vaccines are arriving at thousands of sites across the country over the next week. The White House is promising enough supply to protect the nation's 28 million children ages 5-11. Doctors' offices, children's hospitals and small clinics started ordering doses last week.

"So today's the first day we've been giving this vaccine and our phones are ringing off the hook," said Dr. Jennifer Shu, a pediatrician in Atlanta.

This rollout will look different from the mass vaccinations we saw in February and March with adults. Colorful Band-Aids and cute therapy dogs are tools in the arsenal to make these pokes less scary.

"At first, I was feeling nervous, but I mean, I knew how shots felt so right then and there, I felt fine," said Carter Giglio.

It comes at a time when vaccine hesitancy and misinformation are impacting vaccinations. Only a quarter of parents say they'll vaccinate their kids right away.

"I think we would rather focus on building their immune system rather than giving them just vaccines," said Salah Sarir.

"I just have to see more data. Once it's actually been implemented and they've had some more testing and a little bit more detail and actually talking to my pediatrician," said Brigette Rahming. "We didn't get ours until I actually talked to our primary physician. That was important."

The Pfizer mRNA shot is about 90% effective at preventing symptomatic infection in kids. Those findings are from a clinical trial of more than 4,000 elementary-age children.

It's a third of the adult dose — 10 micrograms. The shots are given three weeks apart.

"As far as the side effects, you know, the initial clinical trials seem to suggest that kids may actually have fewer side effects or not as severe," said Dr. Rosha McCoy, senior director of the Association of American Medical Colleges.

"I think some of the parents who are skeptical, who had bad side effects themselves, may be more skeptical about worrying about inflicting it on their kids," said Dr. Ross McKinney, chief scientific officer at the Association of American Medical Colleges.

Some providers are taking extra time. At Community Medical Center in Missoula, they're waiting to start kids shots Nov. 8.

"One of the reasons that some people aren't vaccinating this Thursday is that the doses are 21 days apart," said hospitalist Dr. Wilson, who is also the vice president of the Montana Chapter of American Academy of Pediatrics. "And if you were to give a vaccine on Thursday, then it would mean that the second dose would have to be on Thanksgiving. And most people are either out of town or with family, and a lot of our health care workers are off."

The first children getting vaccinated today will be scheduled for their second shot Nov. 24. That's the day before Thanksgiving. Given that science says you're considered fully vaccinated two weeks after that second shot, children vaccinated now will be fully protected before the Christmas holiday.