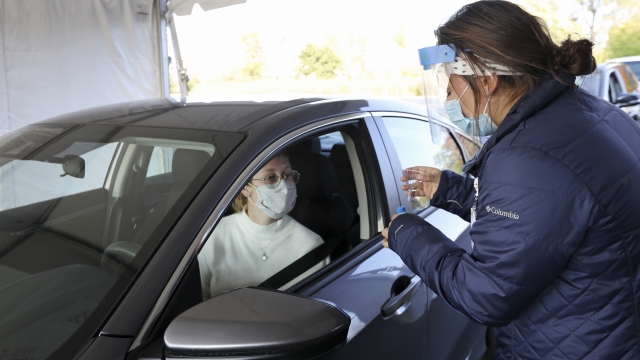 SMS
U.S. Cases Rise, Averaging 50,000 Per Day
By Newsy Staff
By Newsy Staff
October 15, 2020
The average number of new COVID cases in the U.S. has been slowly rising since mid-September when it was closer to 35,000.
SHOW TRANSCRIPT

The number of COVID cases is rising.

That number's been slowly rising since mid-September when it was closer to 35,000.

The number of deaths remains fairly steady at about 700 per day on average.

Take a look at Wisconsin.

That's one state seeing cases spike, averaging nearly 3,000 new cases per day — down from less than 1,000 back in September.

That's also a significant spike from just about 250 last month.

Wisconsin isn't alone. A majority of states, they're seeing COVID cases rise right now. To help us understand where we are, also, where we're headed in this pandemic with schools with small gatherings. I spoke with Dr. Hillary Fairbrother. She's an emergency medicine physician in Houston.

"This disease is still being spread rampantly in many of our communities, and we're not through this yet. We talk about the over seven million people in the U. S. that have had confirmed cases. But we're a country of many, many, many more people than that. And I worry that we could see escalations as we did in April, or as we did in July throughout various regions of this country, um, in either those same communities or new communities such as Wisconsin, which is seeing its own rapidly rate of increase in cases over the last couple of weeks," Dr. Hilary Fairbrother said.