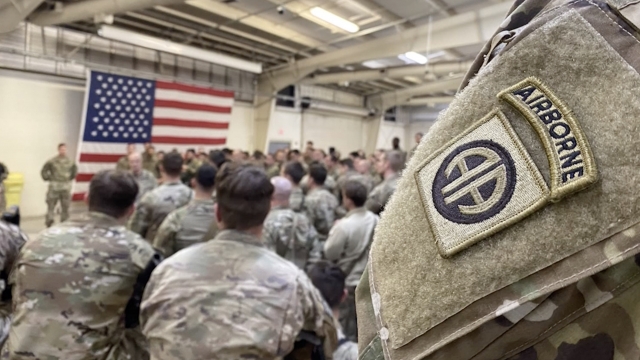 The U.S. is planning to send more troops to the Middle East. In a statement, a Department of Defense spokesperson confirmed to Newsy the troops will be deployed to Kuwait "as an appropriate and precautionary action in response to increased threat levels against U.S. personnel and facilities." It's unclear how many troops will be added, but some outlets are reporting it could be around 3,000.

These troops are being sent from the Immediate Response Force of the 82nd Airborne Division in Fort Bragg, North Carolina — the same brigade that sent approximately 750 soldiers on New Year's Eve.

The announcement came hours after the U.S. killed Major-General Qasem Soleimani in an airstrike at Baghdad's international airport. Soleimani was the head of Iran's Quds Force, which the U.S. considers a terrorist organization. The deputy commander of the Iran-backed Popular Mobilization Forces was also killed.

U.S. defense officials told NBC News the deployments were not in response to the strike. The New Year's Eve deployment came after thousands of people stormed the U.S. Embassy in Baghdad earlier this week.

The Pentagon confirmed Thursday that the U.S. military had carried out the airstrike and said it had no choice because American lives were at risk. The Defense Department said "Soleimani was actively developing plans to attack American diplomats and service members in Iraq and throughout the region." President Donald Trump authorized the strike.

"Soleimani has been perpetrating acts of terror to destabilize the Middle East for the last 20 years," President Trump said. "What the United States did yesterday should have been done long ago. A lot of lives would have been saved."

The attack was carried out without congressional approval, and lawmakers were quick to comment.

Rep. Adam Schiff, the chairman of the House Intelligence Committee, said the killing of Soleimani "increased the danger of the war with Iran, not decreased it."

But Senate Majority Leader Mitch McConnell urged Democrats not to judge the situation until they've been briefed on it.

"I recommend all senators wait to review the facts and hear from [the White House] before passing much of a judgment on this operation and its potential consequences," McConnell said.

Iran has vowed to retaliate. Its Supreme Leader Ayatollah Ali Khamenei has already appointed a new commander to lead the Quds: Brigadier General Ismail Qaani. Khamenei said the agenda of the Quds Force "will be identical" to what it was under Soleimani.