U.S. Beef And Pork Production Is Down Nearly 40% 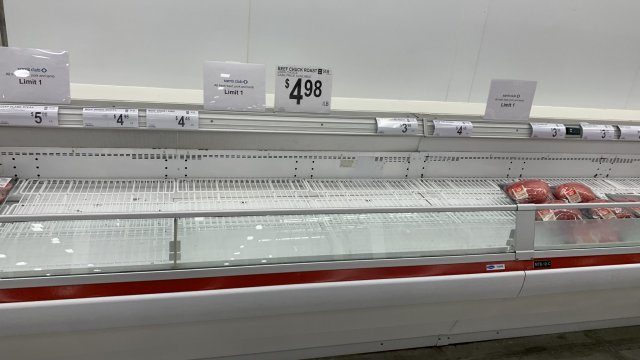 New numbers out from the USDA this week confirm a significant shortage of supply in meats available on grocery shelves is, in fact, ramping up nationally.

"We've never seen anything like this," said Derrell Peel, an agricultural economist at Oklahoma State University. "Right now, for the first three days of this week, beef processing is running at about 39% down from this same period one year ago."

That’s the third week in a row slaughter numbers have dropped at processing plants, and that will have an impact on what’s available to buy.

Walmart says it is seeing what it calls “high demand as customers stock up on protein.”Depending on where you live, you may see signs limiting how much meat you can buy. Costco would not comment, but Kroger, one of the nation's largest grocers, told Newsy it is limiting ground beef and fresh pork purchases.  One major U.S. grocer that requested to remain anonymous said as the situation unfolds, consumers can expect to see fewer specialty meats, because they take longer for stressed plants to process. Instead of thinly sliced steak, you’ll see thicker cuts. Prepackaged, marinated meats could become sparse or disappear.  If grocers cannot get normal retail-sized packages to you, they will try to acquire  bulk meats initially sold to the now-struggling restaurant industry. That means instead of buying a package of 20 chicken wings, you might have to get one with 50.

More than a dozen processing plants have closed in recent weeks because of outbreaks of COVID-19 among workers. An executive order this week that forces them to reopen and prohibits others from closing may not solve the supply problem.

"It probably doesn't change things a great deal," said Peel. "One of the things that we're having to do right now is ... pull every other worker out to space them out. That cuts production roughly in half at the plant."

Peel said consumers should not run out to buy everything on store shelves. "It will only make things worse if we have a lot of, you know, this sort of panic buying. I can assure you that we will continue to see product coming in. It may not be there every day, but it's going to come in regularly."

Mark Greenblatt is the senior investigative correspondent for Newsy and the Scripps Washington Bureau. If you have a story you would like him to look into, email him at mark.greenblatt@scripps.com. Follow him @greenblattmark on Twitter.