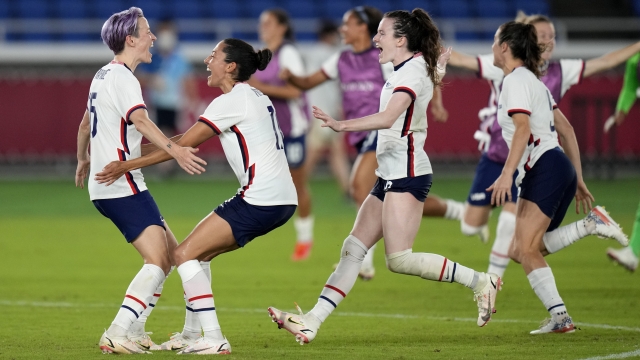 Megan Rapinoe converted the deciding penalty in a shootout and the United States advanced to the semifinals of the women's Olympic soccer tournament 4-2 following a 2-2 draw with the Netherlands on Friday.

United States goalkeeper Alyssa Naeher stopped Vivianne Miedema's opening attempt in the shootout and then saved a shot from Aniek Nouwen before Rapinoe put her penalty away.

After Rapinoe scored, she turned to her teammates, folded her arms and grinned in triumph.

Afterward, she joked about the pressure.

After Simone Biles spoke up about her mental health, the sports world is examining how it can advance its investment in athletes' well-being.

“I just try to stay calm. I always say to myself, `The worst that's going to happen is you're going to lose the whole thing,'” she smiled.

Miedema scored a pair of goals in regulation time for the Netherlands, giving her 10 goals for the tournament — an Olympic record.

Miedema put the Netherlands ahead in the 18th minute but the Americans equalized when Sam Mewis headed in a goal off a feed from Lynn Williams in the 28th. Williams then gave the Americans the lead in the 31st.

Miedema, who was playing in her 100th game for the Netherlands, made it 2-2 in the 54th. Naeher stopped Lieke Martens' penalty in the 81st minute and the game went to overtime.

“I felt amazing. I should have taken the penalty in the game,” Miedema said. “I should have just stuck with my plan and go from there. But it’s life. It’s football and I just need to move on.”

Naeher was as cool following the game as she was during it, playing down her own performance while lauding her teammates.

The Census Bureau estimates a woman earns about 82 cents for each dollar a man earns, and even less if she's a woman of color.

“This team just kept pushing for 90 minutes, 120 minutes, and we just kept believing that we were going to find a way to get it done,” Naeher said. “Very proud of the four players to step up and score their four penalties to go 4-fot-4. That is huge.”

The United States will next face Canada in Kashima on Monday. The Canadians advanced to the semifinals 4-3 on penalties after scoreless draw with Brazil in Rifu.

The Americans went to a shootout for the fifth time in a major tournament. The last time was at the 2016 Rio de Janeiro Olympics, when the U.S. was bounced by Sweden in the quarterfinals.