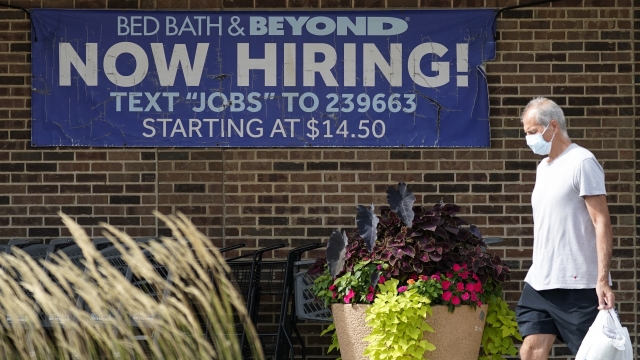 Recent employment data has indicated that the job market may be cooling slightly.

More Americans filed for unemployment benefits last week, the largest number in four months, but the labor market remains strong in the face of persistent inflation and a slowing overall U.S. economy.

The total number of Americans collecting unemployment aid rose by 15,000 to 1.36 million for the week ending Sept. 24.

Applications for jobless aid generally reflect layoffs, which have remained historically low since the initial purge of more than 20 million jobs at the start of the coronavirus pandemic in the spring of 2020.

Recent employment data has indicated that the job market may be cooling slightly, an important consideration for the Federal Reserve when it meets early next month to decide whether or not to raise its main lending rate again.

Alternative training programs are helping workers break through the paper ceiling that keeps viable workers from jobs because they lack a degree.

On Tuesday, the government reported that the number of available jobs in the U.S. plummeted in August compared with July as businesses grow less desperate for workers, a trend that could put a dent in chronically high inflation.

Payroll processor ADP said Wednesday that businesses added 208,000 jobs in September, ahead of analysts' estimates of 200,000, but below the 250,000 that Wall Street expects the government to report in September jobs data coming Friday. The ADP survey does not always mirror the government's tally.

The Federal Reserve is aiming to bring down inflation by rapidly raising its key interest rate, which is currently in a range of 3% to 3.25%. A little more than six months ago, that rate was near zero. The sharp rate hikes have pushed mortgage rates up to 15-year highs, and made other borrowing costlier. The Fed hopes that higher interest rates will slow borrowing and spending and push inflation closer to its traditional 2% target.

Fed officials are increasingly warning that the unemployment rate will likely have to rise as part of their fight against rising prices. If it remains at or near its current 3.7%, most economists believe it would likely mean more rate hikes from the Fed.

Last week, the government reported that the U.S. economy shrank for the second straight quarter, but so far, that has done little to cool the job market, part of the Fed's inflation-fighting strategy.