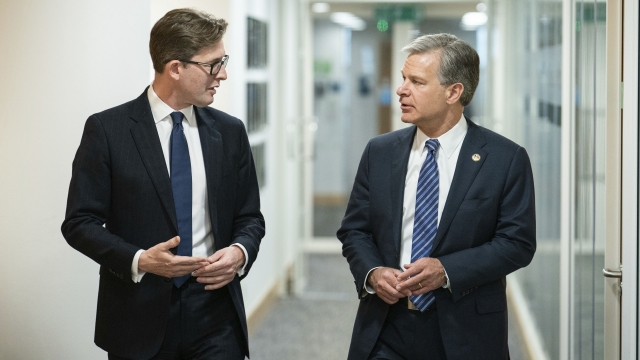 SMS
U.S. And U.K. Intelligence Agencies Warn About China Threat
By Sasha Ingber
By Sasha Ingber
July 8, 2022
Beijing is targeting both politicians and businesspeople, stealing their data as part of a strategy known as the "thousand grains of sand."

The heads of the FBI and MI5, Britain's Domestic Intelligence Agency, issued an unprecedented warning together.

"Today is the first time the heads of the FBI and MI5 have shared a public platform. We're doing so to send the clearest signal we can on a massive shared challenge. China," said Ken McCallum, Director General of MI5.

Despite the danger posed by Russia's war in Ukraine, they say the "most game-changing challenge" comes from the Chinese government secretly exerting influence across the world. They say Beijing is targeting both politicians and businesspeople, as part of a strategy known as the "thousand grains of sand."

Christopher Wray is the director of the FBI.

"The Chinese government is set on stealing your technology, whatever it is that makes your industry tick and using it to undercut your business and dominate your market and they're set on using every tool at their disposal to do it," Wray said.

Wray urged American companies to work with his agents, saying Chinese hackers have installed more than 10,000 hidden backdoors on U.S. networks and that Chinese companies are either secretly owned by, or beholden to, their government.

The FBI has been ramping up investigations to handle an onslaught, even posting this video on its website.

"We've now reached the point where the FBI is opening a new China-related counterintelligence case about every 10 hours," the FBI said.

The joint alarm comes as the U.S. National Counterintelligence and Security Center issued a bulletin to state and local officials. It says China is playing a long game built on detail. Going so far as to rank every U.S. Governor's attitude toward China and trying to undermine a congressional candidate in New York this spring. The candidate had been a student leader in the 1989  Tiananmen Square protests, and an operative allegedly gave instructions to "beat him until he cannot run for election."