U.S. And India Reportedly Trying To Work Out Trade Deal By Sept. 30 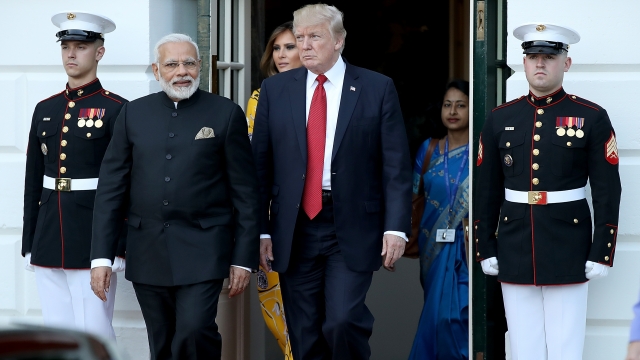 The deal will reportedly "lower some tariffs on U.S. produce and restore preferential treatment for some Indian exports to the United States."

The U.S. and India are reportedly trying to work out a trade deal by the time the U.N. General Assembly in New York ends on Sept. 30.

Sources told Reuters the deal would "lower some tariffs on U.S. produce and restore preferential treatment for some Indian exports to the United States."

The U.S. has had a tense trade relationship with India in recent months. In June, the U.S. ended India's special trade status. India retaliated with tariffs on 28 U.S. products.

The New York Times marks it as part of a trend of "mini-deals" by President Donald Trump leading up to the 2020 election. The president is also expected to sign a mini-deal with Japan next week.

President Trump and Prime Minister Narendra Modi arrived in Houston for an event Sunday morning. While the event isn't directly related to trade, the BBC notes that India is Houston's fourth-largest trading partner. And, as India grows, it could be a major buyer of American oil and gas.