U.S. And Europe Go After Russia's Economy In New Sanctions 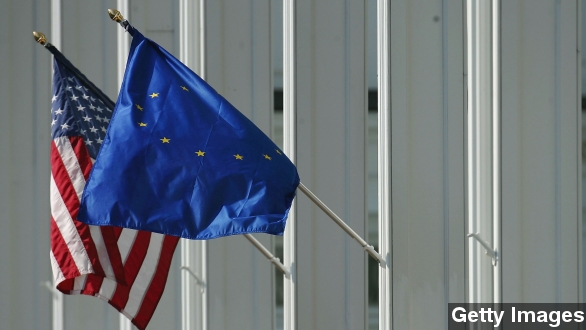 By Jake Godin
July 29, 2014
For the first time, the European Union and the U.S. specifically targeted sectors of the Russian economy, not just individuals in Moscow's government.
SHOW TRANSCRIPT

Both the U.S. and European Union have agreed on a new round of sanctions against Russia — and this time the E.U. is hitting Russia's economic sectors instead of simply targeting individuals. (Via Getty Images)

The E.U. released this statement outlining its sanctions, which will target four parts of the Russian economy: finance, dual-use goods with military applications, oil-productions technology and arms.

The sanctions package, which the E.U. calls a "strong warning", is a response to Russia's annexation of Crimea and its role in destabilizing Ukraine. (Via Getty Images)

While the E.U. seemed reluctant to issue strong sanctions before, it was Russia's response to the MH17 crash, viewed by European leaders as apathetic, that pushed them over the edge. The Wall Street Journal says:

"Top officials in Brussels and Berlin grew furious, not simply because the plane was shot down but because Moscow didn't appear to be making a good-faith effort to help investigate the crash."

Though an article from The Christian Science Monitor says the sanctions might not hurt Moscow as much as the West would like. After all, Russia has options for increased economic activity with Asia and the Persian Gulf.

Still, Russia's financial sector has already showed some wariness of the new sanctions. Earlier this week The Moscow Times reported the nation's Central Bank unexpectedly raised its interest rate from 7.5 to 8 percent in an attempt to buoy the ruble.

Not long after the E.U. revealed its sanctions, President Obama announced renewed U.S. sanctions similar to the E.U.'s in a press conference.

"The United States is imposing new sanctions in key sectors of the Russian economy: energy, arms, and finance. ... And because we're coordinating our actions with Europe, the sanctions we're announcing today will have an even bigger bite." (Via The White House)

A statement released by the U.S. Treasury Department ​lists three Russian banks as targets: the Bank of Moscow, Russian Agricultural Bank, and VTB Bank OAO. Under the new package, American companies can no longer work with these banks.

In his speech, Obama cited Russia's increased military assistance to Ukrainian separatists and artillery fire originating from Russia's side of the border as two reasons to notch up sanctions on the Kremlin.