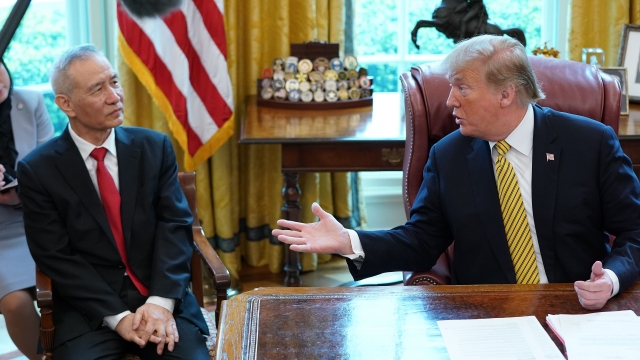 "Today we take a momentous step, one that has never been taken before with China, toward a future of fair and reciprocal trade with China. Together we are righting the wrongs of the past and delivering a future of economic justice and security for American workers, farmers and families," President Trump said.

As part of the deal, which was announced last month, China agreed to purchase about $200 billion worth of U.S.-made goods, including agricultural products like pork and soybeans. It also says it'll tighten its intellectual property rules. In exchange, the U.S. agreed to delay new tariffs on $160 billion in Chinese imports as well as slash some current tariffs in half.

But the deal will leave in place U.S. tariffs on roughly $360 billion worth of Chinese goods. And it also says the Trump administration could tack on more tariffs at a later date if China doesn't abide by the terms of the deal.

To keep relations moving forward, U.S. and Chinese officials now plan to hold semi-annual meetings in an effort to further resolve economic disputes. Treasury Secretary Steven Mnuchin and Chinese Vice Premier Liu He will manage the talks. But they'll reportedly be separate from negotiations over the trade deal's next phase.

The Trump administration removed China from its list of currency manipulators ahead of Wednesday's signing. The U.S. labeled China as a currency manipulator last year after it allowed its currency to weaken when the U.S. imposed new tariffs. The move was largely symbolic, but it escalated trade tensions between the two countries.