U.S. And China Agree On The Outlines Of A Partial Trade Deal 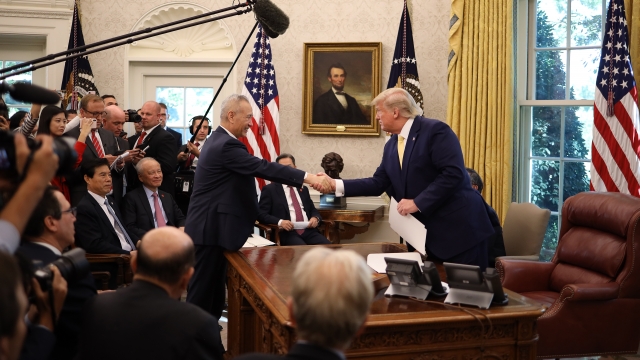 President Donald Trump said a trade deal between the U.S. and China could be signed as soon as next month.

President Trump met with Chinese Vice Premier Liu He at the White House Friday. Both sides agreed on the outlines of a partial trade deal.

"We've come to a very substantial phase one deal," President Trump said. "We've come to a deal on intellectual property, financial services, a tremendous deal for the farmers — a purchase from 40 to 50 billion dollars worth of agricultural products."

In return for all of those things, the U.S. will delay a tariff increase, which was expected to start next week.

The trade war between both counties has been going on for more than a year now, with back and forth tariffs hurting both country's economies. President Trump said he could sign a deal with Chinese President Xi Jinping at a summit in November.

In a letter to President Trump, Xi said: "I hope the two sides will act in the principle and direction you and I have agreed to, and work to advance China-U.S. relations based on coordination, cooperation and stability."

The administration said Friday's deal does not address issues with Huawei Technologies, which has been on a trade blacklist. But President Trump said that will be discussed in a second phase of the negotiations.