U.S. And Afghanistan Agree To Speed Up Peace Talks 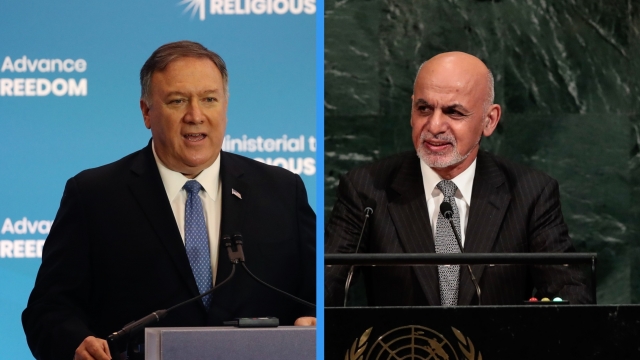 The U.S. and Afghanistan have agreed to speed up peace talks to end the nearly 18-year-long Afghan war.

According to a joint statement from both countries, U.S. Sec. of State Mike Pompeo and Afghan President Ashraf Ghani made the agreement by phone Wednesday. The statement also clarified that this doesn't change President Donald Trump's strategy in South Asia, which includes a conditions-based reduction of the U.S.'s military presence.

Pompeo sent two representatives to Afghanistan to negotiate the details of this agreement. Following the meetings in Kabul, one of those representatives told reporters Friday he's "cautiously optimistic" about the peace talks. He said the U.S. envoy is in "fairly robust dialogue" with the Taliban.

The announcement follows comments from President Trump on Monday that if he wanted to win the war, "Afghanistan would be wiped off the face of the Earth."

The president said, "We're not fighting a war. If we wanted to fight a war in Afghanistan and win it, I could win that war in a week. I just don't want to kill ten million people."