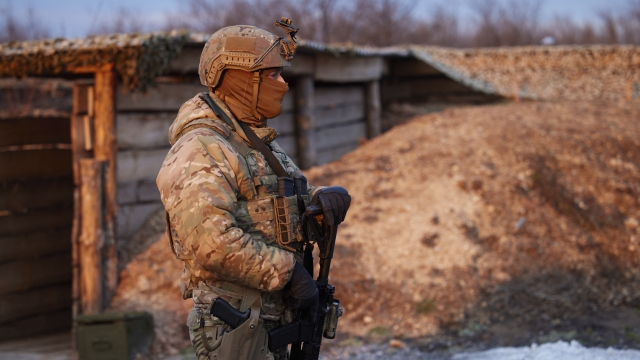 SMS
Ukraine Kindergarten Hit With Shells, U.S. Blames Russia For Attack
By Jason Bellini
By Jason Bellini
February 17, 2022
Western leaders are viewing this episode not as just another in a long-simmering conflict, but as part of Russia's preparations for a possible attack.

In eastern Ukraine's Donbas region, shells landed in a government-controlled area, damaging a kindergarten and wounding — according to Ukraine — two teachers. Power was knocked out.

Western leaders are viewing this episode not as just another in a long-simmering conflict, but as part of Russia's preparations for a possible attack on Ukraine. And it ratchets up even more the information war between Russia and the U.S.

Hours after the shelling, at the U.N. Security Council, the U.S. Secretary of State warned of Russia manufacturing a pretext to invade Ukraine. He said these could include a fabricated terrorist bombing inside Russia; The discovery of a mass grave of pro-Russian separatists; Russia staging of a fake Ukrainian drone strike; or Russia using chemical weapons in a fake or real attack.

The U.S. also laid out how it anticipates a Russian invasion unfolding. It would open with cyberattacks against Ukraine and missiles and bombs across the country. Russian troops would advance on Ukraine's capital, Kyiv and other key targets.

But the U.S. isn't alone in its predictions. NATO Secretary-General Jens Stoltenberg is on the same page.

And U.S. Defense Secretary Lloyd Austin said Russia is clearly getting ready for something.

"We even see them stocking up their blood supplies," he said.

"We've seen a bridge constructed from Belarus into Ukraine or near Ukraine," Wallace said. "And I think we should, as I've said, we'll take them at their word, but we're going to judge Russia by their actions. And at the moment, the troop buildup continues."