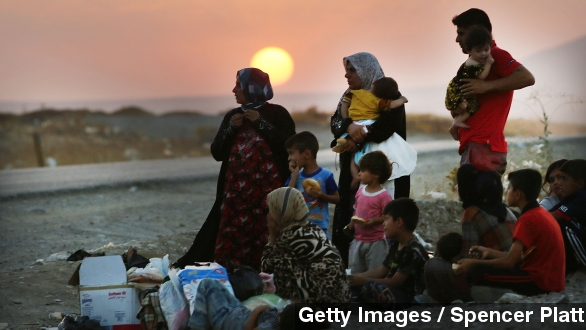 The United States has carried out another round of airstrikes targeting a group of ISIS leaders in Iraq.

The strikes took place Friday near the city of Mosul, Iraq, which was seized by ISIS in June, displacing thousands. Military officials confirmed the strikes Saturday.

The New York Times cites Iraqi officials who said the airstrikes were successful, killing many ISIS militants and at least two regional leaders.

Some reports claimed the strikes critically wounded or possibly killed ISIS leader Abu Bakr al-Baghdadi, however U.S. officials could not confirm if he was hit in the attacks.

Taking out Baghdadi, who took over leadership of the group in 2010, would be a huge blow to ISIS. He is considered one of the most powerful and dangerous militants in the world but is rarely seen in public. (Video via BBC)

What the U.S. could confirm was that the airstrikes hit an envoy of ten armed ISIS trucks. Military leaders say the strike effectively demonstrates how the U.S. can pressure ISIS through air power alone.

But the New York Times writes, "While the air campaign has limited the movements of Islamic State fighters, analysts say that the only way to push the group out of territory is with capable ground troops, which are lacking in both Iraq and Syria."

Confirmation of this most recent airstrike comes a day after President Obama authorized the deployment of 1,500 more American troops to the country, which roughly doubles the amount currently on the ground in a non-combat role. (Video via U.S. Army)