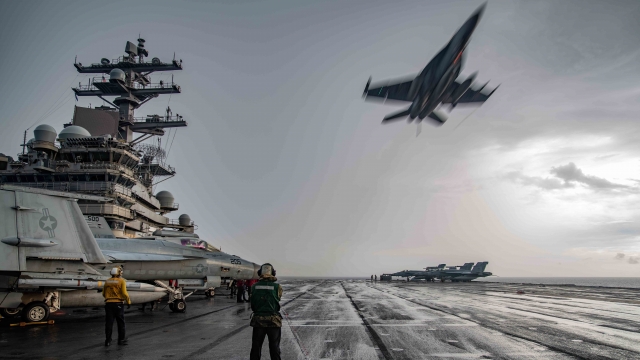 A strike group commander told the Wall Street Journal the U.S. wants to show allies "that we are committed to regional security and stability.”

The U.S. Navy says two U.S. aircraft carriers conducted exercises in the South China Sea on Saturday. The training comes as China is also holding naval drills. Both countries have accused the other of heightening tensions.

In a news release, the Navy described the drills as an Independence Day celebration. One sailer said "nothing celebrates freedom like launching fighter jets from the middle of the ocean at night.” The drills are the largest the U.S. has conducted in recent years.

China and several other Asian nations all claim parts of the sea as their own. On Thursday, the Pentagon said China's recent exercises in the area are the latest in a history of actions to "assert unlawful maritime claims and disadvantage its Southeast Asian neighbors in the South China Sea."

A spokesperson for the Seventh Fleet said the exercises aren't in response to any "political or world events." But a strike group commander involved in the operation told The Wall Street Journal that “the purpose is to show an unambiguous signal to our partners and allies that we are committed to regional security and stability.”

Last year, U.S. leadership warned China that the U.S. won't ignore actions that threaten the sovereignty of other nations.