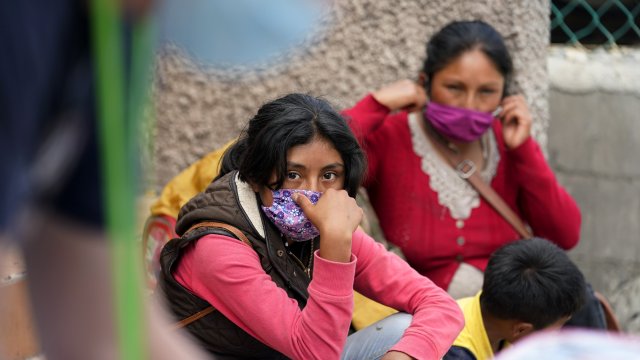 SMS
U.S. Welcomes Some Asylum-Seekers Who Were Awaiting Hearings In Mexico
By Ben Schamisso
By Ben Schamisso
February 19, 2021
The Biden administration will gradually allow up to 25,000 eligible migrants to await decisions on their asylum cases within the U.S.
SHOW TRANSCRIPT

After waiting months, sometimes years, in Mexico, migrants stranded by a Trump-era policy are being allowed into the U.S. starting Friday as their asylum cases play out.

"I can't believe that President Biden made such a fair decision," said Pedro Ruiz Tamayo, a Cuban migrant who has been waiting in Mexico for two years for his asylum hearing in the U.S.

The Biden administration plans to let in up to 25,000 eligible migrants, starting slowly at a San Diego border crossing first to avoid logistical chaos.

Next week, border officials will add two border locations in Texas, hoping to eventually let in several hundred people every day at each designated port of entry.

Since Trump introduced the so-called Remain in Mexico program two years ago to address claims that migrants didn't show up to their hearings, 70,000 asylum-seekers have been forced to wait outside the country for their cases to be heard.

Around 1,000 have been living at a tent camp in Matamoros, Mexico, within eyeshot of Texas.

"People are desperate and cold and need to be processed as soon as possible," said immigration lawyer Jodi Goodwin, who's been crossing regularly to Mexico to help migrants with their cases.

"It would have been ideal if this processing would have started last week before the cold hit, but I guess the administration just wasn't ready to roll out with it yet," she added.

The United Nations is leading registration efforts and deciding who gets priority. Only migrants with active cases in the program will be allowed into the U.S. — and only after they have tested negative for COVID-19.

"It's nice to get those WhatsApp messages that have little praying hands, emojis and heart emojis instead of the sobbing, crying emojis, which I have seen a lot for a long time," she said.

Once in the U.S., migrants could be enrolled in the "alternatives to detention" program to ensure they appear at their court hearings. The program ranges from voluntary check-ins with local ICE offices to electronic ankle bracelets.

The Biden administration calls the plan another step toward restoring humanity to the U.S. immigration system. But also warns that it "should not be interpreted as an opening for people to migrate irregularly to the United States."

A group of Republican lawmakers recently sent a letter to President Biden saying that the plan "sends the signal that our borders are open."