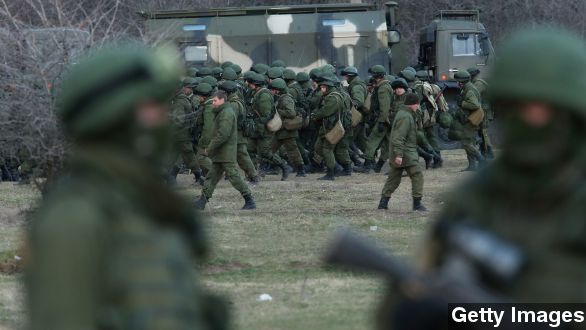 Instead of softening its approach after the downing of Malaysia Airlines Flight 17, it appears Russia is upping the ante.

​Reports indicate Moscow is now intervening  more directly in the Ukrainian conflict after a passenger plane was shot down over the country's east, killing 298 people. (Via Getty Images)

According to The Washington Post, U.S. officials say Russia has moved some 15,000 troops to the border, and is preparing to arm rebel fighters in Ukraine with even more powerful rocket systems.

"The U.S. says Russian forces are now firing artillery barrages at Ukraine's military from inside Russia a half dozen times in the past few weeks." (Via CBS)

Russia firmly denied that it was escalating its involvement in the conflict.

The U.S. claims a Russian-provided surface-to-air missile downed Flight 17, and said Moscow bears the responsibility if separatists fighters in Ukraine did indeed bring down the plane. (Via Getty Images)

The New York Times explains American officials "hoped the shock of the episode would prompt the Kremlin to rethink its approach, but they are increasingly convinced it has not."

Russia, for its part, has accused the U.S. and its European allies of conducting a "smear campaign" over its role in the plane crash.

The Russian Foreign Ministry released this statement claiming "Washington shares the responsibility for the bloodshed in full", and accuses U.S. officials of chopping "a big basket of anti-Russian cliches ... [and] trying to superimpose them on the international community."

A BBC correspondent stationed in Russia says there is a sense in the country that they've been the victims of recent events.

"Amongst the public here there is a sympathy for those who were killed in the downing of the plane, but politically speaking I think there is a sense of defiance."

State-controlled Russian media has absolved Russia of responsibility for the crash. Pointing the finger at Ukraine, Russian media mirrors the ongoing blame game between the Kremlin and Western leaders. (Via Komsomolskaya Pravda, Nezavisimaya Gazeta, Moskovsky Komsomolets)

President Obama has called for a cease-fire until an investigation of the crash site is completed. So far, that has not materialized and it is unclear if an international investigation will be done at all. (Via The White House)

American officials believe the latest escalation by Russia could be the result of rebels losing territory to Ukrainian forces.