U.S. Refugee Admissions Headed For Historic Lows, With None In October 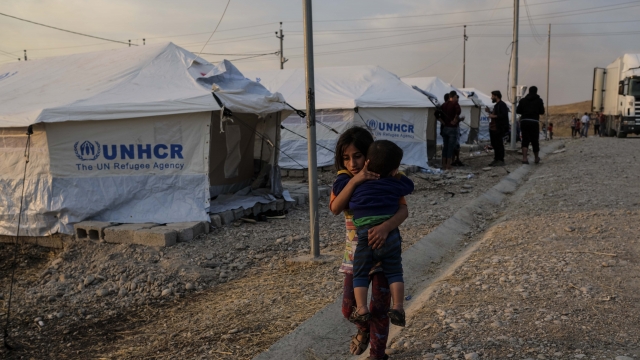 SMS
U.S. Refugee Admissions Headed For Historic Lows, With None In October
By Peter Hecht
By Peter Hecht
October 30, 2019
The Trump administration isn't expected to admit a single refugee in October. And its proposed cap of 18,000 this year would be the lowest since 1980.
SHOW TRANSCRIPT

The global refugee population is at its highest level since World War II, with nearly 70 million people displaced by armed conflicts in Syria, Yemen, Ukraine and across Africa.

The U.S., long the worldwide leader in taking in such people, is on pace to admit the fewest number of refugees since Congress created a refugee settlement program in 1980. And now CNN reports that the Trump administration is unlikely to admit a single refugee in all of October.

The State Department has canceled some 500 airline reservations for refugees who were due to travel to the U.S. in October after a moratorium on new admissions was extended until Nov. 5.

It's part of a Trump administration plan that aims to cap the number of refugees allowed into the country at 18,000 this year.

The refugee moratorium was extended twice in October as thousands of people were fleeing Turkey's military assault on Kurdish forces in Syria. The United Nations says 6.6 million people have already been forced from the county by civil war since 2011, with another 6 million displaced inside Syria.

Politico reports that admission delays are also affecting refugees from Iraq, including many who had worked with U.S. troops. Some 4,000 are awaiting U.S. admission this year. Last year, only 465 were let in due to delays in processing and increased scrutiny of refugee applications.

The State Department told CNN that it intends to reschedule travel for approved refugees whose admission was disrupted by the moratorium. But advocacy groups say the delays in admission are unprecedented.

The interim director of Refugee Council USA, a coalition of aid groups, said: "We are systematically re-traumatizing people who have already been through a significant amount of trauma. It's unconscionable."

Ken Cuccinelli, acting director of U.S. Citizenship and Immigration Services, says it would be "irresponsible" to resettle refugees from around the world as tens of thousands of migrants from Central America arrive at the U.S. southern border.

He says his agency has a backlog of 330,000 unresolved asylum cases, from people seeking legal U.S. residency in fear of violence or persecution in their homelands.