U.S.-North Korean Relations Are Still Tense Ahead Of Resumed Talks 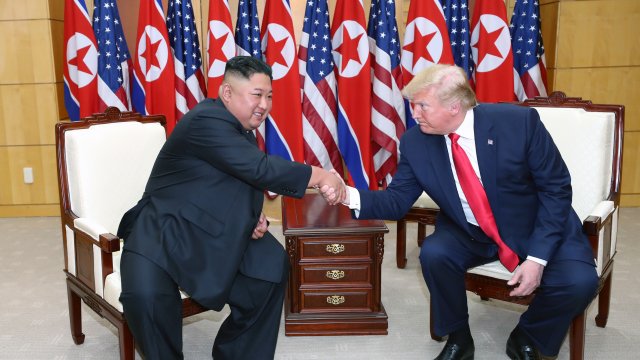 As the U.S. and North Korea get ready to resume denuclearization talks, relations between the two countries are still pretty tense.

It all started back in February, after President Donald Trump and North Korean leader Kim Jong-un met for a summit in Hanoi, Vietnam.

Their first summit in 2018 went fairly well. Kim reaffirmed his "firm and unwavering commitment to complete denuclearization." And in return, President Trump agreed to "provide security guarantees" to North Korea.

But the Hanoi summit was widely seen as a failure. The meeting turned sour when the two leaders couldn't come to an agreement on denuclearization.

Here's the problem. The U.S. has demanded that North Korea get rid of all its nuclear weapons before it starts lifting sanctions. But Kim wants to roll back his country's weapons program in phases.

During a surprise meeting at the demilitarized zone this summer, President Trump and Kim agreed to restart denuclearization talks.

Still, North Korean officials have voiced a renewed willingness to return to the negotiating table after national security adviser John Bolton turned in his resignation last month. And they praised President Trump's decision to reevaluate how talks between the two countries should move forward.

The newest round of working-level talks are set to begin Oct. 5. It's unclear exactly where the discussions will take place.