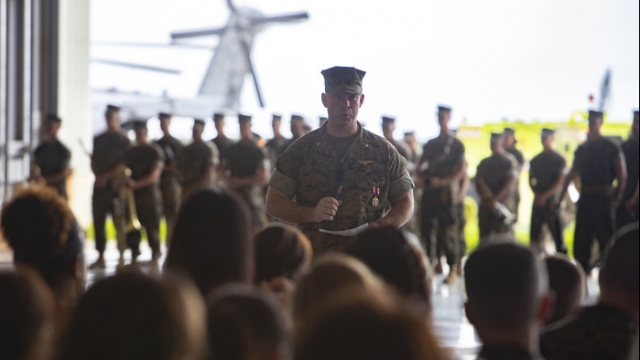 Coronavirus outbreaks at American military bases are affecting U.S. and Japanese relations. As of Wednesday, 136 American service members were confirmed to have COVID-19 at four bases on Okinawa.

That's stirring health fears among the Japanese population. And it's spurring calls for immigration controls to prevent transmission of the virus from the country with the most infections on Earth: the U.S.

The worst outbreaks are at Marine Corps Air Station Futenma and Camp Hansen. They are stirring long-simmering local resentments over the U.S. troop presence on the island.

Koichi Nakano, a political science professor at Japan's Sophia University, says the situation is sparking criticism of the "special status" for U.S. military personnel. The bases' failure to contain the virus is seen as another lack of consideration for the locals.

"Even outside the base, their behavior comes across as being arrogant, and, you know, like, behaving like colonial masters of a sovereign nation."

Lt. General H. Stacy Clardy, the U.S. Marine commander in Japan, put out this video trying to assure base personnel and nearby communities that the outbreak is being treated with utmost seriousness. He said infected service members and those they've been in contact with are being isolated, and travel to and from bases is being restricted.

But Okinawa Gov. Denny Tamaki doesn't trust those assurances. He told CNN he wants a more thorough lockdown, including a ban on all U.S. travel to the bases.

"Honestly, I have doubts about whether adequate precautions are being taken to prevent the virus from spreading. First of all, please stop people from the U.S. mainland from coming to Okinawa. I would like the alert level to be raised to the highest level at Futenma and Camp Hansen in order to put those two facilities into lockdown."

Clardy promised the governor transparency and full cooperation in containing the virus.

"III MEF is in close coordination with all U.S. military services on the island and the Okinawan government and Okinawan health professionals. To ensure coordinated response to the outbreak, I've spoken with Gov. Tamaki and have reaffirmed our commitment to remaining transparent about our situation and reinforce that we are taking all prudent measures to not only protect our forces, but also protect the communities in which we live."

Japan has had fewer than 23,000 confirmed coronavirus cases, compared to 3.5 million in the U.S. Okinawa, with 1.5 million people, only had 148 cases before the outbreak among U.S. service personnel.

Okinawans have protested the U.S. bases due to noise, crime and the enduring legacy of World War II. Political analyst Tobias Harris says many see the virus outbreak as another sort of invasion.

"There's a long history of distrust between Okinawans and the U.S. military. And Futenma, which is at the heart of this outbreak, is the base that locals have wanted moved for a long time."

Japanese officials are trying to trace contacts between U.S. service members and Okinawan residents, particularly over the July Fourth weekend, when bases were open and local bars were packed.