Round Two Of U.S.-Cuba Talks Focus On Embassy Openings 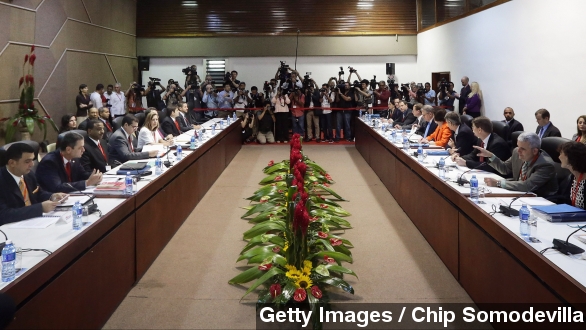 SMS
Round Two Of U.S.-Cuba Talks Focus On Embassy Openings
By Kate Grumke
By Kate Grumke
February 27, 2015
Although there were no big announcements or changes, the second round of talks between the U.S. and Cuba focused on opening embassies.
SHOW TRANSCRIPT

The second round of talks to normalize U.S.- Cuba relations wrapped up Friday without any big announcements or changes.

The meeting was focused pretty squarely on clearing the way for embassies in the two countries — and not on either side's more nuanced policy demands.

In a press conference after the event, Cuba’s representative said the two sides had made progress and that she’s optimistic that in the next few weeks they’ll be close to having a date for the opening of embassies.

One of the issues that will still have to be addressed will be Cuba’s current banking problems, which was something that came up at the last round of talks.

Because of Cuba’s spot on the U.S.’s state sponsored terrorism list, the country has a hard time finding banks in the U.S. to do business with.

Because of that, the country’s missions to the United Nations and in D.C. have been cash-only operations for the past year, which a senior state department official said is "really uncomfortable for them and frankly unsafe."

The State Department has said it’s working as fast as it can to reevaluate Cuba’s spot on the list but has also said the reopening of diplomatic relations shouldn’t be too dependent on that designation.

“The state sponsorship of terrorism designation is a separate process. It is not a negotiation. It is an evaluation that is made under a very strict set of requirements,” said Secretary of State John Kerry during a press conference Friday.

Although the U.S. says the terrorism designation is separate, Cuba sees that designation as inherently tied to the two countries’ abilities to open their respective embassies.

The U.S. has also said its diplomats will need to be able to move around more freely in Cuba and be able to operate more easily regarding things like receiving shipments. (Video via Cuba Hoy)

This comes as a U.S. travel company is claiming to be the first to offer flights to Havana — although really all it’s doing is bundling together the two separate flights necessary to get to the Island.

Once the countries get their embassies sorted out, they will be able to start discussing other issues. Both sides have said they want to have a meeting about human rights in the near future.