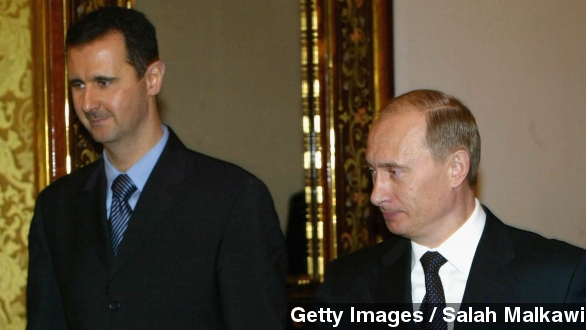 Assad's arms supplier is hosting another round of Syrian peace talks. And to absolutely no one's surprise, the opposition was mostly a no-show.

Russia has invited both sides to the negotiating table in the hopes of finding a solution to Syria's civil war, a war that's left more than 200,000 people dead in less than four years. (Video via Hazzm Movement)

But most of the groups calling for Assad to go turned down their own invites, including the main Western-backed opposition group, the Syrian National Coalition.

And that may have something to do with the moderator. Russia’s hardly a neutral party in this. It has strategic and financial interests in Syria, namely a naval base and a lucrative weapons contract. (Video via The Kremlin)

As for the Syrian regime, it did send its ambassador to the United Nations, Bashar Jaafari, to Moscow.

But even Assad himself seems doubtful Jaafari will get much accomplished.

In an interview with Foreign Affairs published Monday, the Syrian dictator dismissed the opposition figures attending the talks as "puppets" of other countries.

Officially, the talks are about laying the framework for a future peace conference, something like last year's in Geneva. We all remember how well that worked out.

"The peace talks in Switzerland ended Saturday after less than an hour of negotiations." (Video via CCTV)

"The long-awaited Geneva 2 peace talks ended today without any semblance of agreement." (Video via PBS)

With a political deal appearing more remote than ever, the United Nations is now focusing on brokering local cease-fires to slow the violence.