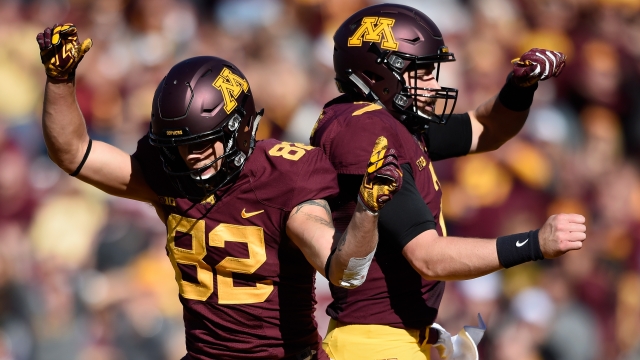 SMS
U. Of Minnesota Football's Boycott Ends; 10 Players Still Suspended
By Grant Suneson
By Grant Suneson
December 17, 2016
University of Minnesota football players said they will play in the Holiday Bowl on Dec. 27 after they threatened to skip it.
SHOW TRANSCRIPT

Players allege their 10 suspended teammates weren't given fair treatment or due process after being accused of sexually assaulting a woman in September.

After the boycott was announced, KSTP published redacted documents from the university's investigation.

It included lengthy and graphic account of what the woman says happened that night. She said she tried to refuse some of the men's sexual advances but that they didn't listen.

The boycott was scuttled after players met with University President Eric Kaler and he told them the suspensions weren't going away.

None of the players involved were charged with a crime after a police investigation, but the university maintains the 10 players violated the school's code of conduct.

The team announced the suspended players will get a fair hearing in front of a diverse board.

Minnesota is set to play Washington State in the Holiday Bowl on Dec. 27.