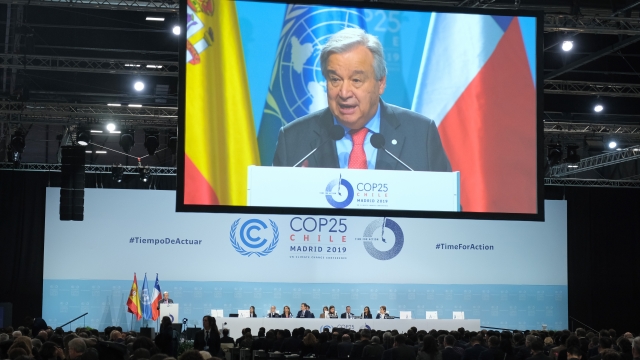 Guterres' remarks at the U.N. climate meeting in Madrid came with a warning. "If countries and businesses fail to recognize the challenges of a warming planet," he said, they will create "a sure-fire recipe for economic disaster."

The climate meeting was taking place as President Donald Trump mocked teen climate activist Greta Thunberg on Twitter for having what he called an "anger management problem." Thunberg was honored Wednesday as TIME magazine's Person of the Year for being the "biggest voice on the biggest issue facing the planet."

But in opening the conference, Guterres said the world needs to heed urgent calls of young people about the "climate emergency."

“Millions throughout the world, especially young people, are calling on leaders from all sectors to do more, much more, to address the climate emergency we face. They know we need to get on the right path today, not tomorrow. That means important decisions must be made now," Guterres said.

That view was supported in a new report by the Global Commission on the Economy and Climate. The organization is calling for investing $90 trillion over the next 10 to 15 years on "low carbon, smart and resilient infrastructure" in population centers, while easing reliance on fossil fuels and protecting forests.

In fact, the global body hails its plan as a "use it or lose it" business opportunity that could generate annual earnings of $26 trillion if nations and companies seize the challenge. But it warned: "The train is fast leaving the station."

The calls come as scientists warn of a "state of planetary emergency." The consensus of climate scientists is that countries need to cease burning fossil fuels by 2050. They say that would ensure that global temperatures don't rise more than 1.5 degrees Celsius, or 2.7 degrees Fahrenheit, to avoid irreversible damage to the planet.