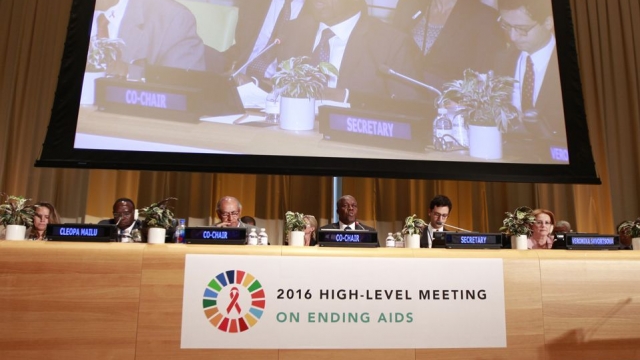 SMS
U.N. Report Shows Overall HIV/AIDS Progress, But It Varies By Region
By LeeAnne Lowry
By LeeAnne Lowry
July 17, 2019
UNAIDS says the disparity could be because key populations are still marginalized and "left behind in the response to HIV."
SHOW TRANSCRIPT

An United Nations organization working to end AIDS as a public health threat by 2030 released a new report that shows a mixed picture of progress made fighting the disease between 2010 and 2018.

The report, released Tuesday by UNAIDS, shows there were 770,000 AIDS-related deaths globally in 2018. That's 33% lower than in 2010, but progress varied depending on the region: some areas saw a sharp drop in deaths while others — like the Middle East and North Africa — experienced an increase.

Similarly, while there was a 16% drop in new HIV infections overall, some areas saw an increase. Eastern Europe and Central Asia, for example, experienced a 29% jump in new HIV infections. The organization says the disparity could be because key populations — like gay men, transgender people and sex workers — are still marginalized and "left behind in the response to HIV."

The slowing of progress might also be related to funding. In 2016, the U.N. General Assembly agreed to increase investment in UNAIDS to least $26 billion by 2020 in order to scale up programs and stay on schedule to meets its 2030 goal. That funding was on track 2016 and 2017, but dropped by almost $1 billion in 2018.