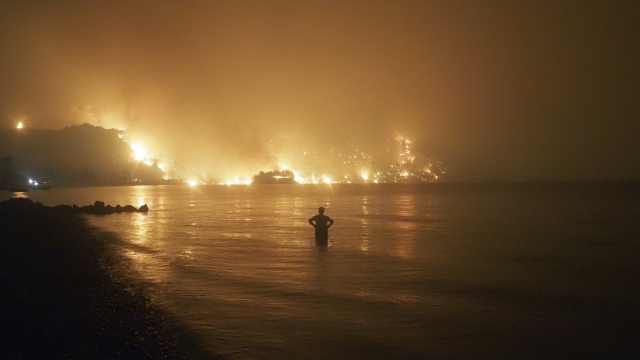 SMS
U.N. Report Says World Is Heating At A Dangerously Fast Pace
By Clayton Sandell
By Clayton Sandell
August 9, 2021
Despite the dire predictions, experts say the worst effects of the climate crisis can be slowed.
SHOW TRANSCRIPT

Massive wildfires, historic flooding, heat waves and drought – all signs of a critically warming planet that scientists warn are speeding up now affecting every corner of the globe.

A new report out Monday from a U.N. climate group representing scientists from 195 nations makes it clear, saying "It is unequivocal that human influence has warmed the atmosphere, ocean and land" – calling the scale of changes "unprecedented."

Valérie Masson-Delmotte with the Intergovernmental Panel on Climate Change said: "The report is very clear that with further warming in the coming years, we expect to see new extremes that are unprecedented in magnitude, frequency, timing or in regions that have never encountered those types of extremes."

As humans pump more greenhouse gases into the atmosphere, the report looks at the latest science from around the world, finding climate extremes are getting more extreme. Heat waves hotter and more frequent. Sea level rising. Extreme downpours bringing too much water to some places while others are locked in record drought.

James Marshall Shepherd is the director of the Atmospheric Sciences Program at the University of Georgia. He said: "It's happening we're living it and so I think the projections going forward, should be a warning sign for all of us both as public and for policymakers, we've got to act now."

And wildfire season is becoming year-round affecting the health of millions of people downwind.

Without drastic and immediate cuts in greenhouse gases, scientists say the global average temperature is on track to pass 3.6 degrees Fahrenheit this century.  A number that seems small, but scientists say will have huge impacts.

"Our body temperature is 98.6 degrees on average," said Marshall Shepherd. "Now imagine if we elevate that by 3.6 degrees, that's a significant fever, and our body systems would start to react to that 3.6 degree fever."

In one scenario, if temperatures rise by just over 7 degrees Fahrenheit, scientists predict once-in-a-decade droughts will happen five times as often.  The heaviest rainstorms would be nearly three times as likely. Snow cover could drop by 25 percent and the number of intense hurricanes could jump 30 percent

"The most vulnerable parts of our society, the most marginalized communities are going to feel the brunt of these climate changes the most here in this country and abroad," said Marshall Shepherd.

Despite the dire predictions, experts say the worst effects of the climate crisis can be slowed.

Inger Andersen, who is executive director of the U.N. Environment Programme, said: "We can't undo the mistakes of the past. But this generation of political and business leaders, this generation of conscious citizens can make things right."

But dramatically cutting greenhouse gases has so far been an elusive goal. The world's nations will get another chance to reach a agreement at a U.N. climate conference in November.