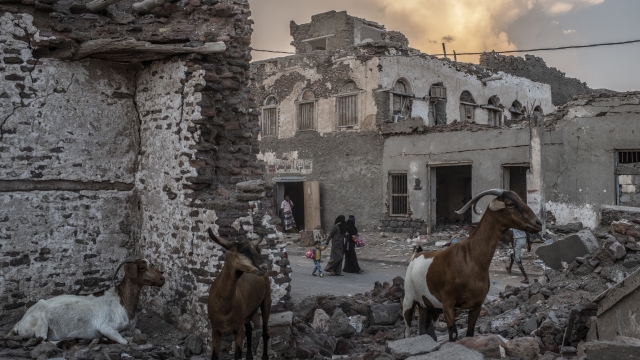 The United Nations says arms sales by the U.S., the U.K. and France are deepening a humanitarian disaster in Yemen and potentially aiding perpetrators of war crimes.

These are the findings of a highly critical report to be presented next week to the U.N. Human Rights Council in Geneva. To be clear, the document by a U.N.-appointed panel blames direct actors in the Yemeni war for vast human rights violations in the conflict.

The panel accuses Saudi Arabia, the United Arab Emirates and the Yemeni government of possible war crimes for bombing of Yemeni civilians and using famine as a weapon. It also faults the Iran-backed Houthi rebels for deploying child soldiers and indiscriminately shelling non-combatants.

The report criticizes Western governments for effectively aiding in the Saudi-led bombardment. And the panel said: "The legality of arms transfers by France, the United Kingdom, the United States and other states remains questionable."

Those arms are being used by the Saudi coalition, the panel said, in "air strikes in violation of the principles of distinction, proportionality and precaution." It also said the arms may benefit forces committing war crimes by cutting off populations from food, using "starvation as a method of warfare."

The chairperson for a U.N. human rights group focusing on Yemen said the international community must mobilize "to free the Yemeni people from the persistent injustice they have been enduring." In a statement, he said: "Five years into the conflict, violations against Yemeni civilians continue unabated, with total disregard for the plight of the people and a lack of international action to hold parties to the conflict accountable."