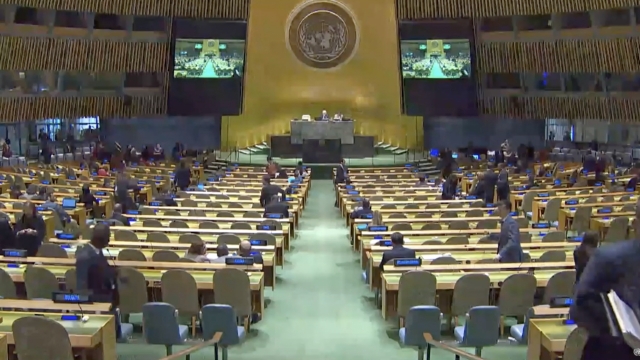 The U.N. General Assembly has voted to condemn the U.S.' economic, commercial and financial embargo on Cuba for the 28th year. Thursday's vote rejects U.S. concerns about the island's human rights.

Brazil, Israel and the U.S. were the only three to vote "no" out of 193 members. Ukraine and Colombia abstained.

In 1960, Cuba nationalized about $1 billion of U.S.-owned property following Fidel Castro's revolution. The U.S. responded by placing an embargo on the island, and strengthened it two years later in 1962. The embargo bans travel from the U.S. to Cuba, as well as trade between the countries.

On Thursday, Cuba's Minister of Foreign Affairs Bruno Rodríguez Parilla told the U.N. assembly "the U.S. government is responsible" for damage to Cuba's economy and harm to the wellbeing of Cuban families. He emphasized that Cubans can't access fuel, medical equipment or drugs produced by U.S. companies.

U.S. Ambassador to the U.N. Kelly Craft defended the embargo partly by pointing to Cuba's record on human rights. According to Human Rights Watch, Cuban authorities have been known to detain political dissenters. The island's government controls all news media, and Kraft said freedom of employment is sometimes limited.

But Rodríguez said the U.S. "does not have the least moral authority to criticize Cuba or any other country when it comes to human rights. We reject the reiterated manipulation on human rights with political purposes as well as the double standard that characterizes it."

The General Assembly's resolution is not enforceable, but the outcome of the vote does reflect the world opinion on the blockade. It also gave Cuba the opportunity to demonstrate the isolation the U.S.' embargo has created.