U.N. Chief To Meet With Putin, Zelenskyy To Press For Peace 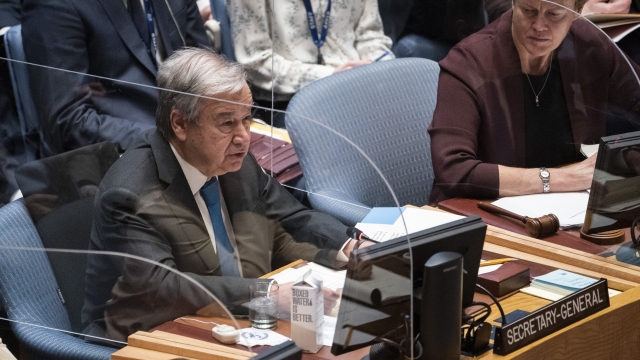 U.N. Secretary-General António Guterres is set to meet separately with the presidents of Russia and Ukraine this week to make urgent, face-to-face pleas for peace.

Kremlin spokesman Dmitry Peskov confirmed that Guterres is to meet Tuesday with Russian Foreign Minister Sergey Lavrov and that Putin will also host the U.N. chief.

In both visits, Guterres aims to discuss "steps that can be taken right now" to stop the fighting and help people get to safety, U.N. spokesperson Eri Kaneko said.

"He hopes to talk about what can be done to bring peace to Ukraine urgently," she said.

Guterres has urged Russia to stop its attack since it began two months ago, in what he called "the saddest moment" in his five years in the U.N.'s top job. He appealed Tuesday for a four-day "humanitarian pause" in fighting leading up to Sunday's Orthodox Easter holiday.

"Stop the bloodshed and destruction. Open a window for dialogue and peace," he implored.

Guterres sent the U.N.'s top humanitarian official to Moscow and Kyiv earlier this month to explore the possibilities of a cease-fire.

But the secretary-general had faced questions about whether he himself should travel to press for peace. In a recent letter, former U.N. officials called on him to step up his personal, public involvement.

Whatever overtures may have been made privately, the now-planned trip "is a visible symbol of what the United Nations is supposed to be standing for, which is peace and security," one of the letter-writers, former U.N. political affairs chief Jeffrey Feltman, said by phone last week.