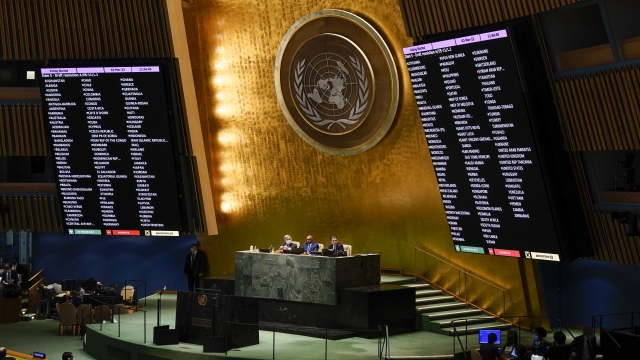 The U.N. General Assembly voted at an emergency session Wednesday to demand an immediate halt to Moscow's attack on Ukraine and the withdrawal of all Russian troops, with sustained applause breaking out after a formidable show of support among the 193 member nations against the invasion.

The vote on the "Aggression against Ukraine" resolution was 141-5, with 35 abstentions. It came as Russia bombarded Ukraine's second-largest city and besieged two important ports, and a huge convoy of Russian military vehicles was poised outside the Ukrainian capital of Kyiv.

Only Belarus, Syria, North Korea and Eritrea joined Russia in opposing the measure, a powerful indication of the international isolation that Russian President Vladimir Putin faces for invading his country's smaller neighbor — and that the resolution's supporters sought to emphasize.

The abstentions included China and India, as expected, but also some surprises from usual Russian allies Cuba and Nicaragua. And the United Arab Emirates, which abstained on Friday's similar Security Council resolution, voted "yes."

Cuba had spoken in Russia's defense on Tuesday, with Ambassador Pedro Luis Cuesta blaming the crisis on what he said is the U.S. determination to keep expanding NATO toward Russia's borders and on the delivery of modern weapons to Ukraine, ignoring Russia's concerns for its own security. He told the assembly the resolution "suffers from lack of balance" and doesn't begin to address the concerns of both parties, or "the responsibility of those who took aggressive actions which precipitated the escalation of this conflict."

Unlike Security Council resolutions, General Assembly resolutions are not legally binding, but they do have clout in reflecting international opinion. Under special emergency session rules, a resolution needs approval of two-thirds of those countries voting, and abstentions don't count.

That was the result of Wednesday's vote concluding historic "Uniting for Peace" #UNGA session.

The resolution demands that Russia immediately ceases use of force against Ukraine & withdraws its military forces. https://t.co/mkvny9F3LZ pic.twitter.com/2GIuYV1Ccn

"An overwhelming majority of the world recognizes that if we do not stand up to Putin's Russia, it will only inflict further chaos and aggression on the world," President Biden said in a statement.

After Russia vetoed a similar Security Council resolution Friday, Ukraine and its supporters won approval for the assembly to hold an emergency special session -- the first since 1997 -- to try to spotlight opposition to Russia's invasion.

Deploring Russia's "aggression" against Ukraine "in the strongest terms," the measure demands an immediate halt to Moscow's use of force and the immediate, complete and unconditional withdrawal of all Russian forces.

The resolution says that Russia's military operations in Ukraine "are on a scale that the international community has not seen in Europe in decades and that urgent action is needed to save this generation from the scourge of war." It "urges the immediate peaceful resolution of the conflict" and reaffirms the assembly's commitment "to the sovereignty, independence, unity and territorial integrity of Ukraine within its internationally recognized borders."

The measure also condemns "the Russian Federation's decision to increase the readiness of its nuclear forces" — an issue raised by many U.N. members concerned about that prospect.

Before the vote, Ukraine's U.N. ambassador, Sergiy Kyslytsya, told the assembly, "They have come to the Ukrainian soil, not only to kill some of us ... they have come to deprive Ukraine of the very right to exist." He said that "the crimes are so barbaric that it is difficult to comprehend."

Russian Ambassador Vassily Nebenzia urged U.N. members to vote against the resolution, contending Western nations exerted "unprecedented pressure" with "open and cynical threats" to get support for the measure.

"This document will not allow us to end military activities. On the contrary, it could embolden Kyiv radicals and nationalists to continue to determine the policy of their country at any price," Nebenzia warned.

"Your refusal to support today's draft resolution is a vote for a peaceful Ukraine" that would not "be managed from the outside," he said. "This was the aim of our special military operation, which the sponsors of this resolution tried to present as aggression."

The resolution also calls on Russia to reverse a decision to recognize two separatist parts of eastern Ukraine as independent. The measure further deplores "the involvement of Belarus in this unlawful use of force against Ukraine," a characterization that Belarusian Ambassador Valentin Rybakov flatly rejected in his speech to the assembly shortly before the vote.

He said Belarus' only involvement in the conflict was organizing talks, due to continue Thursday, between Russia and Ukraine. Belarus has taken Russia's side, with Rybakov saying the resolution reflected "double standards" toward Russia and the West.

U.N. Secretary-General Antonio Guterres told reporters immediately after the vote: "The message of the General Assembly is loud and clear: End hostilities in Ukraine — now. Silence the guns — now. Open the door to dialogue and diplomacy — now."

"We don't have a moment to lose," he said. "The brutal effects of the conflict are plain to see … It threatens to get much, much worse." 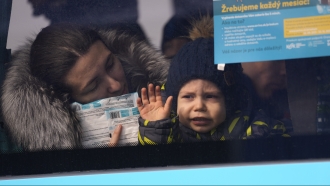 U.S. Ambassador Linda Thomas-Greenfield urged all countries to "keep the momentum going," do everything possible to help the Ukrainian people, hold Russia accountable and "match our strong words with strong actions."

Explaining China's abstention, Ambassador Zhang Jun used more emotional language than at previous U.N. meetings, citing "dramatic changes of the situation in Ukraine" and calling what is unfolding "heart wrenching." He reiterated Beijing's support for the sovereignty and territorial integrity of all countries, and for the peaceful settlements of all disputes in line with the U.N. Charter.

"The top priority right now is to ease the situation on the ground as much as possible, and prevent the situation from escalating or even getting out of control," Zhang said.

During more than two days of meetings preceding the vote, there were speeches from about 120 countries.

From the tiny Pacific island nation of Palau to Europe's economic powerhouse Germany, country after country lashed out at Russia's invasion of Ukraine and urged support for the U.N. resolution.

There were only a few that supported Russia and some that took no position, such as South Africa. Urging compromise and diplomacy to find a lasting resolution to the crisis, South Africa abstained.

During the meeting, some supporters of the resolution had signs under the nameplates of their countries in Ukraine's blue and yellow colors reading: "#TodayWeAreAllUkraine."

"We have stood up against those who seek to redraw the world's borders by threat or use of force," she said. "For if President Putin's aggression against Ukraine goes unchecked, which country could be next?"