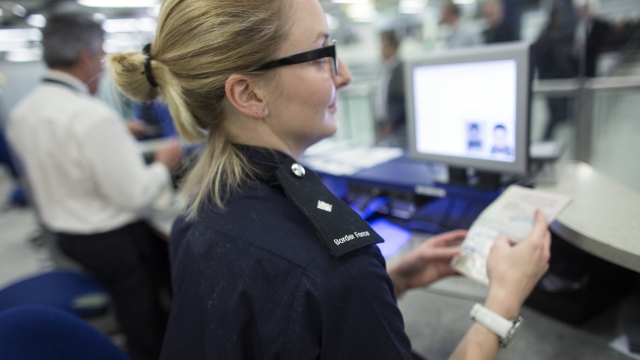 SMS
U.K. To Close Its Borders To Unskilled Workers, Non-English Speakers
By LeeAnne Lowry
By LeeAnne Lowry
February 19, 2020
The U.K. says it will prioritize "the skills a person has to offer, not where they come from."
SHOW TRANSCRIPT

Starting next year, the U.K. government will close its borders to unskilled workers and people who don't speak English.

The government announced the upcoming changes on Wednesday. It's an immigration overhaul — part of the country's separation from the EU, which officially happened last month.

The new system will be points-based. The U.K. said in a statement it will prioritize "the skills a person has to offer, not where they come from." It specifically mentions workers like scientists, engineers and academics.

The system will require 70 points in order to get a visa. Fifty of those points are non-negotiable — the applicant must have a job offer at an "appropriate skill level," the offer must be approved by a sponsor, and that person must speak English at a required level. Self-employed people will not be allowed in.

The remaining 20 points can be filled with several other categories. For instance, if the applicant's occupation is experiencing a job shortage, that'd earn the rest of the points. It can also be filled by having a relevant Ph.D. or a high enough salary offer.

The government explained, "We need to shift the focus of our economy away from a reliance on cheap labor from Europe and instead concentrate on investment in technology and automation. Employers will need to adjust."

The plan has received a lot of backlash. The country's Liberal Democrat party said the proposal is "based on xenophobia, not on the social & economic needs of our country."

The nonprofit Recruitment and Employment Confederation released a statement saying U.K. nationals won't be able to fill low-skilled roles, which will lead to labor shortages. It urged the government to consider a temporary visa program to allow temporary workers, contractors and self-employed people to work in the U.K.