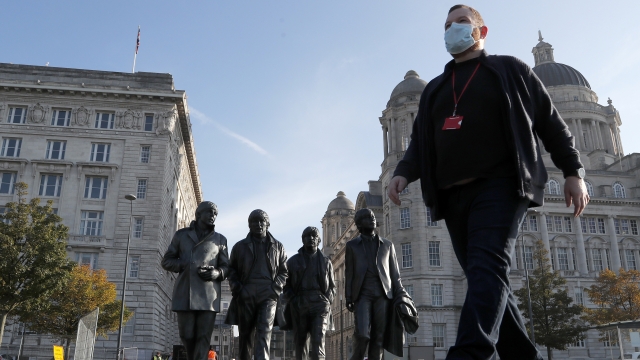 The United Kingdom is rolling out rapid COVID-19 testing in Liverpool, which has one of the highest infection rates in England.

Half a million people in Liverpool will be tested regularly for the virus in Britain's first citywide trial of widespread, rapid testing.

According to a statement from the government, testing will begin later this week at sites throughout the city, and will include new methods that can provide results in an hour or less.

Everyone who lives or works in Liverpool will be offered the test, regardless of whether they have symptoms.

Prime Minister Boris Johnson hopes mass testing will provide a way out of the coronavirus crisis, which has killed more than 46,000 people across the U.K. in Europe's deadliest outbreak.

Johnson expects to distribute millions of the new rapid tests between now and Christmas.

England is scheduled to go into a second national lockdown on Thursday as the government struggles to control a second wave of infections that risks swamping hospitals and emergency rooms.

Additional reporting by Danica Kirka of The Associated Press.