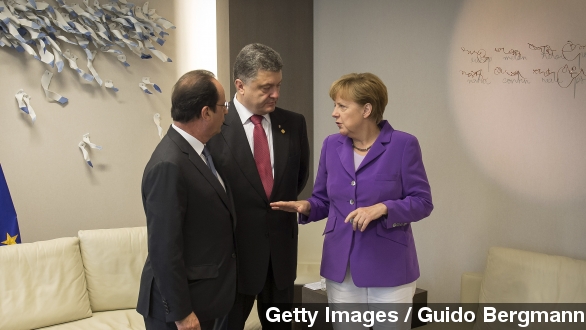 SMS
U.K. Report Says E.U. 'Sleepwalked' Into Ukraine Crisis
By Jake Godin
By Jake Godin
February 20, 2015
A new report released by the House of Lords accuses the E.U. Committee of a poor response to the crisis in Ukraine.
SHOW TRANSCRIPT

"President Poroshenko briefed us on the terrible situation in his country as a result of Russian aggression," said European Council President Donald Tusk during an informal meeting in February.

The European Union "sleepwalked" into the Ukraine crisis.

A new report by the U.K.'s House of Lords European Union Committee describes the E.U.'s response to the Ukraine crisis so far as "sleepwalking." (Video via House of Lords)

In the report, released Friday, the British committee says the E.U. underestimated what Russia's response would be when the organization tried to bring Ukraine into its union. (Video via Ukraine Ministry of Defense)

"It is totally unacceptable that there are Russian soldiers on Ukrainian soil," said U.K. Prime Minister David Cameron in an interview with The Telegraph.

The report also criticized its own government’s response, saying the U.K. was not as “active or as visible” as it could have been on the issue.

That's compared to France, Germany and Poland — all of which have actively taken part in negotiations in trying to defuse Ukraine's crisis.

The Lords' panel report comes at a time of continued fighting between pro-Russian separatists and the Ukrainian government. Despite a Feb. 15 cease-fire, government soldiers were forced to retreat from the key railroad town of Debaltseve on Wednesday. (Video via Ukraine Ministry of Defense)

The report might also spell trouble for the U.K.'s Prime Minister David Cameron.

The Guardian says it could look like Prime Minister Cameron is ceding foreign policy decisions to Germany and France while the U.K. stands on the sidelines. (Video via PBS NewsHour)

The fact that The Telegraph reports a former NATO commander described the prime minister as a "foreign policy irrelevance" probably doesn't help, either. (Video via the Conservative Party)

The Lords' report, which comes from a Parliament jointly controlled by Cameron's Conservative Party and the Liberal Democratic Party, has suggested the use of more sanctions against Russia if the situation in Ukraine escalates any further.