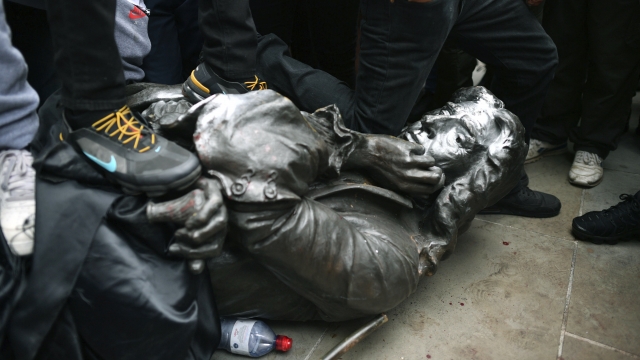 SMS
U.K. Protesters Topple Slave Trader Statue, Throw It In Harbor
By Bailey Vogt
By Bailey Vogt
June 8, 2020
A statue of slave trader Edward Colston, who made his fortune working for the Royal African Company, was thrown into the River Avon in Bristol.
SHOW TRANSCRIPT

During a Black Lives Matter protest in Bristol, England, demonstrators pulled down a statue of a 17th Century slave trader and threw it into the local harbor.

The bronze statue of Edward Colston was toppled during protests against racial inequality — initially sparked in the U.S. over the death of George Floyd.

Once the statue was pulled to the ground by ropes, many took turns kneeling on the sculpture's neck — a reference to Floyd, who died after an officer knelt on his neck in Minneapolis. The British protesters eventually threw the statue of Colston into the River Avon as the crowd cheered them on.

Colston made his fortune working for the Royal African Company, a slave trader, for eleven years. To celebrate his philanthropy to the city of Bristol, a statue of him was erected in 1895.

Since then, Colston's controversial past has led to petitions to remove the statue or revise the language on its plaque.

Local police said "an investigation will be carried out" to identify the people who damaged the statue, adding that footage of the incident was already being studied.

Bristol mayor Marvin Rees said the statue will eventually be retrieved and will "likely" end up in a museum, according to The Bristol Post.