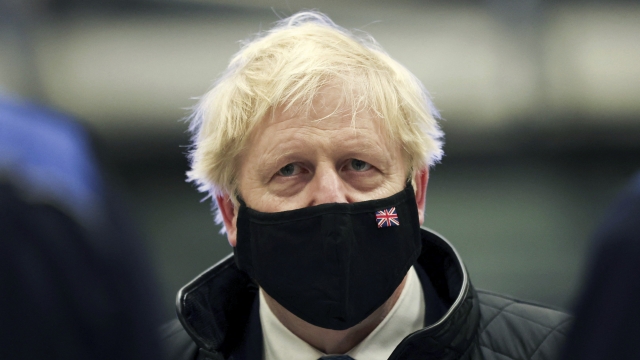 SMS
U.K. PM Boris Johnson Apologizes After 'Partygate' Findings
By Associated Press
By Associated Press
January 31, 2022
An investigation found "failures of leadership and judgement" led to social events during lockdown that "should not have been allowed to take place."

British Prime Minister Boris Johnson apologized Monday after an inquiry found that Downing Street parties while Britain was in lockdown represented a “serious failure” to observe the standards expected of government or to heed the sacrifices made by millions of people during the pandemic.

But Johnson brushed off calls to quit over the “partygate” scandal, promising to reform the way his office is run and insisting that he and his government can be trusted.

“I get it, and I will fix it,” he said in Parliament after senior civil servant Sue Gray published interim findings on several gatherings in 2020 and 2021.

Gray found that “failures of leadership and judgment” allowed events to occur that “should not have been allowed to take place.”

“Against the backdrop of the pandemic, when the government was asking citizens to accept far-reaching restrictions on their lives, some of the behavior surrounding these gatherings is difficult to justify,” she added.

Gray's glimpse inside a 10 Downing St. marked by excessive alcohol consumption and staff afraid to speak out about workplace problems are a blow to Johnson, despite the fact that Gray's conclusions relate to just four of the 16 events she investigated.

Her findings on 12 other events have been withheld at the request of the police, who last week launched a criminal investigation into the most serious alleged breaches of coronavirus rules. The Metropolitan Police force said it had asked for Gray’s report to omit the events being investigated by detectives “to avoid any prejudice to our investigation.”

The allegations that the prime minister and his staff flouted restrictions imposed on the country to curb the spread of the coronavirus — holding “bring your own booze” office parties, birthday celebrations and “wine time Fridays” — have caused public anger, led some Conservative lawmakers to call for Johnson’s resignation and triggered intense infighting inside the governing party.

Johnson urged his critics to wait for the conclusions of the police investigation.