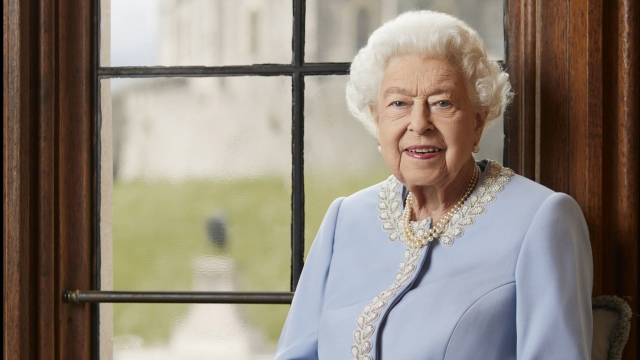 The Union Jacks are lining the streets of London, and fans of the British monarchy are already camped out.

They don't want to miss a minute of the Trooping of the Colour military parade, the flyover by modern and historic airplanes, or the appearance of the royal family on the palace balcony.

But beyond taking in the elaborate spectacles, people are here to celebrate the queen and her Platinum Jubilee.

"She's the best role model in the world, and I mean that," said Mary Jane Willows of Cornwall. "You know, she has reigned for 70 years and has never stepped one foot wrong, never said a wrong word, never upset anybody. She's just mind-blowingly amazing. So we're here to say thank you for looking after us for 70 years."

"(I am here) just to celebrate the Queen's 70 years, you know, of being the Queen, and I'm just so excited that we're here," said Dana Werner of Connecticut. "And I hope that there'll be more crowds that will come. And it's just for the whole pomp and circumstance. We don't have anything like this in the United States and this is just wonderful. I love Britain. I love its history. I love the monarchy. I mean, there's been 62 monarchs, only eight have been women, and I think she is one of the best. And I think she'll go down in history as the best queen ever."

For some, the respect for the monarchy is handed down through the generations.

"When I was a little girl, my grandmother was from Britain and moved to Canada and talked to me about England, all things British, and got me interested," said Angie Hart of Ontario. "And then over the years I just came to admire and respect the queen for her sacrifice and her duty and the hard work that she does."

"The biggest thing is it's a passion for my wife and she's passed that along to our kids, so much so that my daughter has two corgis named Markle and Middleton," Angie Hart's husband Patrick Hart said. "So we have all of these pictures of the queen in our home. And I mean, my friends, I think, make fun of me, but I don't care. It's just fun."

There will be a thanksgiving service Friday at Saint Paul's Cathedral. Saturday, the queen is due to attend the Derby horse race with her family.

Later a concert is planned outside the palace featuring Duran Duran, Queen and Diana Ross. The celebrations will wrap up Sunday with street parties and a pageant in London.