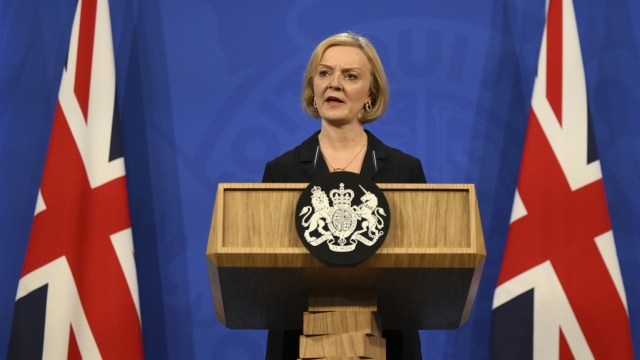 The prime minister vowed to press on with other aspects of her economic plan, saying, "I want to deliver a low tax, high wage, high growth economy."

Embattled British Prime Minister Liz Truss sacked her Treasury chief and reversed course on sweeping tax cuts Friday as she tried to hang on to her job after weeks of turmoil on financial markets.

At a hastily arranged news conference, Truss said she was acting to "reassure the markets of our fiscal discipline" by keeping a planned increase in corporation tax that she previously said she would cut. Truss also fired Kwasi Kwarteng as Treasury chief, replacing him with former Cabinet minister Jeremy Hunt.

Truss is trying to restore order after three weeks of turmoil sparked by the government's tax-cutting "mini budget." The Sept. 23 statement sent the pound plunging to record lows against the dollar and led the Bank of England to step in to prevent a wider economic crisis.

But it may not prove so simple. Truss brushed off a question about whether she should resign, saying, "I am absolutely determined to see through what I have promised."

But her brief, downbeat news conference is unlikely to have reassured her party that she is in control.

Hunt is a government veteran who has served as former foreign secretary and health secretary. He ran unsuccessfully to lead the Conservative Party in 2019, but is widely respected and may offer stability to Truss as she seeks to shore up her base.

Truss had been under intense pressure to scrap some of the $48 billion in unfunded tax cuts that roiled financial markets and led the Bank of England to step in to prevent a wider economic crisis.

Senior members of the Conservative Party were publicly advising the government to take action. The pound rose as much as 1.7% against the dollar on Thursday and bond markets stabilized amid expectations that Truss would revise the economic growth plan.

Truss, a free-market libertarian, came to power last month pledging to cut taxes to spur growth. But her ability to deliver on that commitment is now in doubt.

U.K. Treasury Secretary Kwasi Kwarteng abandoned plans to cut the 45% rate of income tax paid on earnings above $167,000 a year.

Abandoning a promise to halt her predecessor's plan to increase corporation tax from 19% to 25% marks a major departure for Truss — an acknowledgement that the markets needed to be reassured of fiscal discipline. The change reduces the bill for her program by about 18 billion pounds a year.

James Athey, the investment director at Abrdn, described the government plan as a "U-turn on its decision not to U-turn on its profligate tax-cutting policies." Rumors that it would occur calmed markets, he said.

"The risk now is that investors have forgotten that there are significantly more problems than just an ill-advised and ill-timed fiscal easing to deal with," he said.

"Inflation is at multi-decade highs, government borrowing is huge, as is the current account deficit. The housing market is likely to suffer a hammer blow from the jump in mortgage rates and the war in Ukraine rumbles on," he said.

"We may well be through the worst of the volatility but I fear that the U.K. is nowhere near out of the woods."

Conservative lawmakers are agonizing over whether to try to oust their second leader this year. Truss was elected last month to replace Boris Johnson, who was forced out in July.

Some reports suggest senior Conservatives are plotting to replace Truss with a joint ticket of Rishi Sunak and Penny Mordaunt, her two closest rivals in the summer contest for leadership of the party, though it's unclear how that could be achieved.