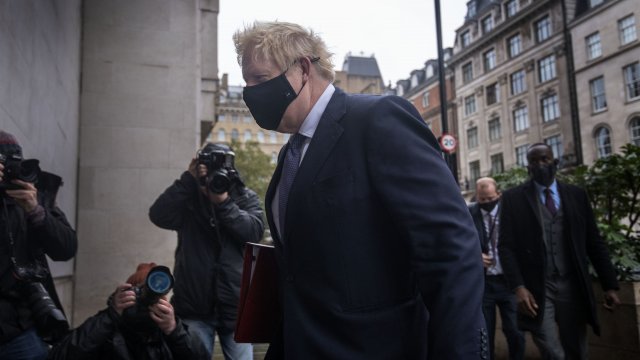 SMS
U.K. PM Boris Johnson Defends His Handling of the Coronavirus
By Alex Arger
By Alex Arger
October 4, 2020
Johnson says the coronavirus situation in the U.K. is "going to continue to be bumpy through to Christmas, it may even be bumpy beyond."
SHOW TRANSCRIPT

British Prime Minister Boris Johnson is defending his handling of the coronavirus after admitting the public is furious with him over the country's restrictions and rising infections.

The U.K. went under lockdown in March then lifted some of its rules in June. The increasing numbers have lead to tightening some rules again — including another round of curfews and public distancing — though not a total lockdown.

Johnson told the BBC his government has been struggling to find a balance between keeping the economy moving and curbing the spread of the virus. His administration has faced criticism for not enforcing tougher restrictions and giving mixed advice during the country's ongoing second wave. Johnson's party is pushing him to ease even the current rules, like a 10 p.m. curfew for bars and restaurants, to save the economy.

Instead of ordering a lockdown, the leader has told people to "behave fearlessly but with common sense" when carrying on with their daily lives.

"Going back to the situation we were in in March, and I really don't want to do this. I don't want to go back to a national lockdown where the overall guidance is stay at home. That is not what we're saying. We want to keep the economy moving. We want to keep young people, pupils in education. But the only way we can do that is if we all follow the guidance and depress the virus, get the virus down by following that guidance and keep things moving as much as we possibly can."

Johnson says he believes changes in testing and the creation of a vaccine could lead the country to normalcy in the next few months. But he said it'll be a bumpy road through the holidays.