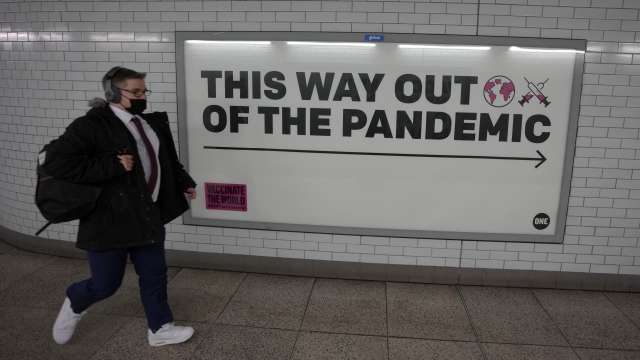 British Prime Minister Boris Johnson says face masks will no longer be mandatory in public places and COVID-19 passports will be dropped for large events as infections level off in most parts of the country.

Johnson told lawmakers that the restrictions were being eased because government scientists think it is likely that the surge of infections prompted by the highly contagious Omicron variant "has now peaked nationally."

While hospitals in northern England still are getting pressed by high caseloads and infections were still rising in schools, Johnson said hospital admissions and patients in intensive care units elsewhere in England were stabilizing or falling.

The government is no longer advising people to work from home, and compulsory face masks will be scrapped in secondary school classrooms starting Thursday.

Mandatory COVID-19 passes will not be needed to gain entry to large-scale events beginning Jan. 27. Face masks will no longer be legally required anywhere in England as of that day.

The restrictions were introduced in December to slow the rapid spread of the Omicron variant and buy time for the population to get their booster vaccine shot.

Official figures showed that COVID-19 infections have dropped in most parts of the U.K. for the first time since early December. The government reported 108,069 new cases on Wednesday, about half the daily number recorded over the holidays.

The requirement for those infected to self-isolate for five full days remains, but Johnson said that measure will also end in the coming weeks. He said while the self-isolation rule expires on March 24, he will seek to scrap it earlier if the virus data continues to improve.