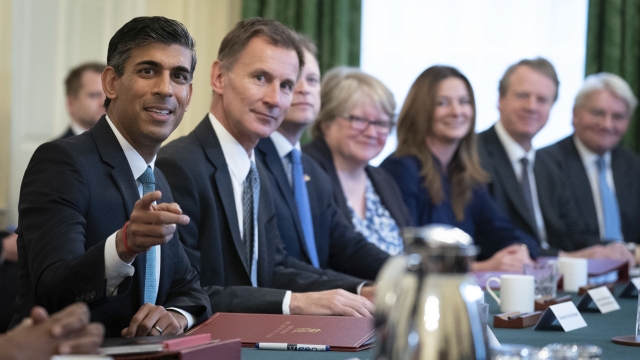 The new British prime minister appointed a government mixing allies with experienced ministers from the governments of his two immediate predecessors.

British Prime Minister Rishi Sunak held the first meeting of his new Cabinet before facing the opposition in Parliament on Wednesday for the first time as leader.

Sunak took office on Tuesday and appointed a government mixing allies with experienced ministers from the governments of his two immediate predecessors, Boris Johnson and Liz Truss, as he tries to tackle Britain's multiple economic problems.

Sunak's office said the lineup "reflects a unified party" and aims to ensure "that at this uncertain time, there is continuity at the heart of government."

But during the regular House of Commons session known as Prime Minister's Questions, opposition politicians are likely to focus on the baggage the new ministers carry from the governments of Johnson – who quit in July after a slew of ethics scandals – and Truss, whose government lasted just seven weeks.

A package of unfunded tax cuts Truss unveiled last month spooked financial markets with the prospect of ballooning debt, drove the pound to record lows and forced the Bank of England to intervene — weakening Britain's fragile economy and obliterating Truss' authority within the Conservative Party.

Sunak is seen by Conservatives as a safe pair of hands they hope can stabilize an economy sliding toward recession — and stem the party's plunging popularity.

Sunak brought in people from different wings of the Conservative Party for his Cabinet. He removed about a dozen members of Truss' government but kept several senior figures in place, including Foreign Secretary James Cleverly and Defense Secretary Ben Wallace.

He faces a backlash for reappointing Home Secretary Suella Braverman, who resigned last week after breaching ethics rules by sending a sensitive government email from a private account. She used her resignation letter to criticize Truss, hastening the then-prime minister's demise.

A leading light of the Conservatives' right wing who infuriates liberals, Braverman is tasked with fulfilling a controversial, stalled plan to send some asylum-seekers arriving in Britain on a one-way trip to Rwanda.

Opponents expressed astonishment that Braverman could be back in her job less than a week after her resignation and before an investigation of her breach of the ethics rules.

"People make mistakes in their work," he told the BBC. "No one goes to work with the intention of making a mistake."

Sunak also kept in place Treasury chief Jeremy Hunt, whom Truss appointed two weeks ago to steady the markets. His removal likely would have set off new tremors.

Hunt is scheduled to set out soon how the government plans to come up with billions of dollars to fill a fiscal hole created by soaring inflation and a sluggish economy, and exacerbated by Truss' destabilizing plans.

The government has not confirmed whether Hunt's statement, due on Oct. 31, will be delayed because of the change of prime minister.